﻿
There were two things going on today.
First was the weather front moving up from the South West and
some serious ergonomic issues that are messing with my fun.

Bad stuff first.  The pain has moved from by sternum area to my back between the shoulder blades.  Moving the hangpoints forward wasn’t the cure.  I spoke with Chad and he suggested that I lower the brake lines or attach another set of handles and see how having my hands lower felt.  I hope it works.

The air was twitchy from the South South West.  I set up into the wind and planned to turn onto the runway after inflation.  The wing turned nicely and I taxied for a bit before committing to launch.  It was a nice morning and I practiced the yank and bank till it hurt which was  ALL TOO SOON.
Landing… I stayed on the power and touched down lightly it was was surprising when the machine lifted as I added some brake to bring the wing down.  I guess I’d   forgotton how the Eden likes to bleed off energy and should plan on floating above the surface for a ways.  I’m also going to have to practice carting with the wing up and must do a few dead stick landings to get the feel for this wing.

After a quick break I set up for a second flight.  The wind indicator was showing some the breeze bumping up and down between 3 and 8 mph and twitching on a 30 degree arc.  I decided not to go and while I was packing it shifted 180 degrees to the NNW.  The front was showing a bunch of grey clouds moving in from the SSW.
Until I took it down, the telltail wouldn’t settle down and it was good to be on the ground.

Mike Bennett and & arrived at 6:30.  It was much better than yesterdays rain/mist, there was a fresh 7mph breeze from the SSW and clear blue skies.

Trying to solve the chest pain I have made some modifications and this was the first time to try them out.  In order to position my arms farther forward I have moved the hangpoints 1 inch and to rebalance the rig, Mike and I mounted a 12 pound weight over the front wheel.  The brake lines have been lenghtened 3 inches and the brake pulley was lowered by the same amount and drawn in closer to the riser.
I will have to heal before I know if the problem has been fixed but I think I’m on the right track.  It was definitely more comfortable and the pain is no worse.  The next step will be to remount the battery forward of the seat this will not ad weight to the rig but allow the hang points to be moved another inch forward.  Then I’ll play with the seat mount to get it dialed in.

Mike and I flew into the wind SSW and overflew the old ICBM Missile Silos.  The wind speed increased dramatically with altitude.  Mike flew low and I flew 400 feet higher at a much lower speed.  For the first time I flew with the trimmers out and enjoyed the Eden III ‘s much crisper response.  On the return leg downwind I exceeded 50 mph.
After a short break I went up again.  The last several flights have all been higher wind and its been a good experience.  The Eden comes up fast and sometimes pulls the trike back a couple of feet in the process but with a smooth surface it feels natural.  The wing comes overhead … I ad throttle, start the roll and usually rotate within 50 feet.  On soft terrain (sand) or worse…. bumpy (pasture) it may not be so easy.  On this flight I stayed close to the patch and worked on steering.  It is still not as comfortable as the trike buggy because I do not have the same range of motion.  I don’t seem to have the power and it feels like I’m using different muscles.  I can’t quite put my finger on the difference but I’ll work on it.
Paul M arrived just before I finished the second flight, so I decided to go for three.  It was starting to get thermic and was most bumpy over by the farm houses so I flew out to the gun range and crabbed back to the LZ.  The winds at the surface were twitchy as hell and I had to go around twice before I felt good to land.  Two of the three landings I popped a wheeley after touch down.  Next time I’m NOT going to kill the engine at two feet but will either go in dead stick or under power and taxi.  It was a good day. 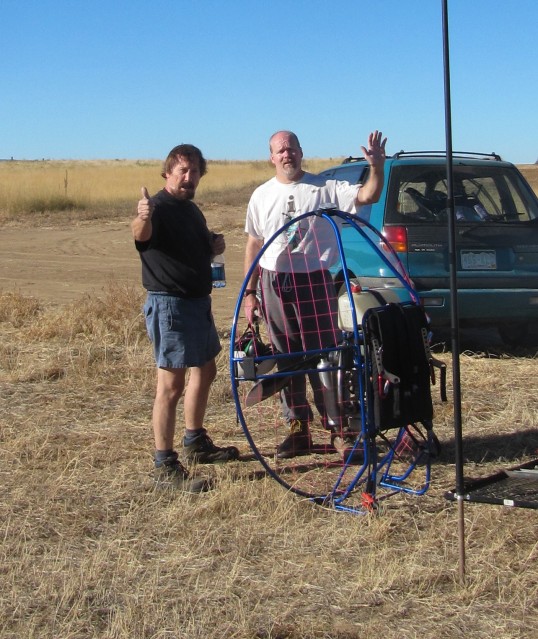 Tonight I added a back pad to see if it would solve the chest pain.  Nope… I was more upright but it also moved me closer to the risers which moved my arms back even farther.  It was a beautiful flight anyway, the winds were about the same as yesterday.  Nice smooth laminer air.

This is the problem …my arms are being pulled back 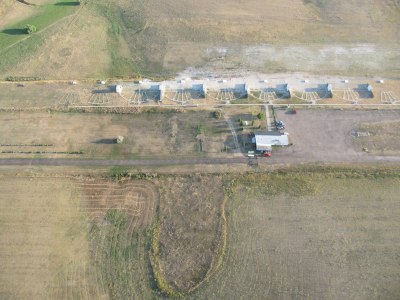 Solo AM Flight…    One of the little quirks with the Falcon 4 stroke is that if you don’t turn off the ignition the battery will drain.   No big deal if you have jumpers and a helper to hold the machine and move the truck.  I had the jumpers.   I wasn’t sure how it would work but putting the spare under the front wheel kept the trike in place nicely while I got the truck moved.
It was blowing 8 to 10 which is about the most I will attempt.  The Eden III came up without pulling the trike back and the take off was clean.  It sure makes a difference to have a smooth surface to launch from.
Flight was shortened because my chest was hurting and the winds were building… 30 minutes was good.

Mike got the gang together it was the first time I’ve seen some of these guys all year.  Mike, Ramon,  Paul M.,  Robert Kimpton (new guy but very experienced aviator and PG instructor), and John Sieb.

Mike and I jerry rigged the broken weld with a bolt and duct tape, I never thought I would be repairing my flying machine with “bailing wire and broken boards” but it was a good repair and I set up with confidence.

I blew the first launch when the wind shifted causing the wing to come up crooked.  I tried to recover but aborted when it looked to hairy to keep trying.  Mike’s machine was down with exhaust problems but he couldn’t stay away from the action which turned out to be a good thing because he was right there to help reset the wing and I launched from where I had aborted.   Thanks Man!

It was a good flight.  I could tell that I was still too far forward of the risers my chest was hurting and I was ginger with the brake input.  It didn’t keep me from going high and doing a few diving turns but I sure didn’t stay up as long as I would have liked.

When it got too thermic to fly I followed  Mike back to his place and we repaired the cage, toot sweet.

John and I finished the day racing the “Paradiso” at Chatfield. It was the last race of the summer series.  The winds built over the course overpowering the big Norlam Genoa. Never the less we won it clean and locked in third place for the series.

Very short flight.  The trim buckle got hooked in the hang point loops causing the wing to pull to the right.  I made one circle and landed.  On post flight I noticed that the weak weld on the cage had opened up so the was it for today.
On the bright side I tried putting my arms behind the hang straps and found it much better.  I was laid back too much but with some back padding I think I can avoid straining my abs.

I went to the Doc with huge chest pains which he diagnosed as inflammation of the cartilage connecting my ribs to the sternum.  800mg Ibuprofin helped

Take off was to the east and climb was not great.  I flew over the H. S. parking lot and was not much higher than the light poles.  Yikes!

The seat has shifted or I have because I was leaning too far back and it strained my muscles between the shoulder blades.  Next flight I’ll try a seat back pad and put my arms behind the hang point straps.