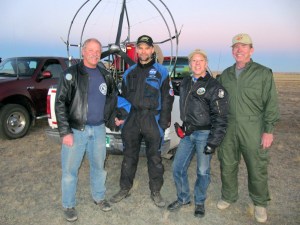 (Paul, Ranger Bo, Joe, Jerry)
What a great afternoon!…At one o’clock I was in the office looking at the sky and pacing the floor. It took ten minutes for me to make up my mind and abandon the store to Mike. I was home by 1:40 and dressed loaded and on the road by 2:00pm. At 3:15 I was pulling in to Springs East watching a whole bunch of guys playing the low and slow over the LZ.
Most of the PPPPG Club were there and Mike Bennett and I made up the Denver contingent. Once again the air was perfect, smooth as glass with the only bumps coming from the wings in the air. My first flight I used the east taxiway and blew the first launch when the wing came up very wild. I’d like to think that I snagged a line on a weed since there a few likely suspects that had grabbed lines during set-up. Jerry gave me a hand setting up and the second attempt was smooth. Lots of banking and playing with the trimmers out. The PPS felt good and I could have used either wing but I’m liking the feel of the PowerPlay with trim out. Gotta find a way to rig the Eden III so I can reach the brake pulley with the trim out.

John had his Kawasaki “Beast” mounted on a quad and was able to fly it even though the prop was way too small. For a time he worked with Juanita pulling her on the quad with his vehicle. 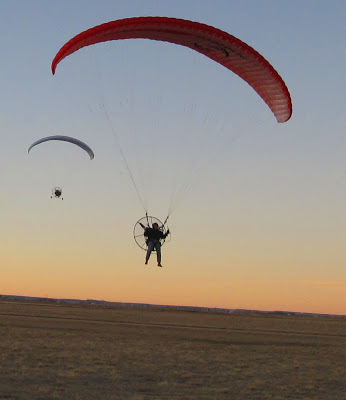 It looked awkward but she was able to get it inflated and feel the wing without having to worry about the prop blending the wing. At one point I was on final when he started backing into my path. No worries… I didn’t have to land … so I climbed out and played a while longer. 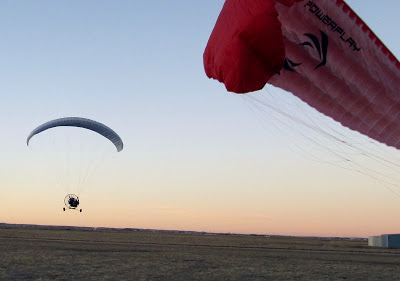 Later on the ground I caught up with Bo, Jerry, Paul, and the rest. There were some of the new guys (Robert & Ned?), that I knew from the forum it was good to meet them and put a face with the internet persona. WOW…Perfect weather on a day when a bunch of us could get off… We might not get another day like this till Spring,

The best story is where Jerry flew my wing thinking that it was his Muse. It wasn’t until he landed and I asked him if he liked the Eden that he figured it out.
East Springs Airport is several miles east of Colorado Springs it is flat and there are rabbits and coyotes to chase.
Sunday there was quite a crowd at Simms.