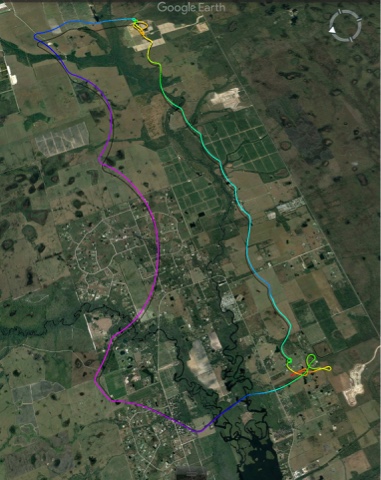 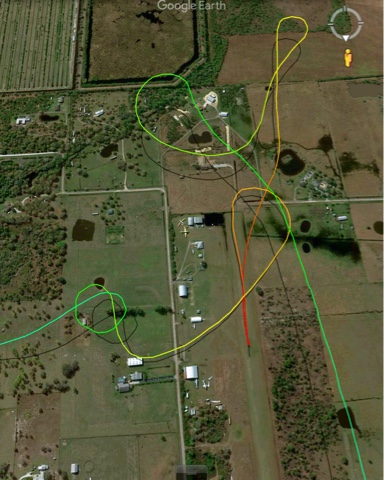 Used new IPad with the FltSkyHi app.  The new mini has a barameter.   Yea!

Saw and buzzed a bunch of buffalo. 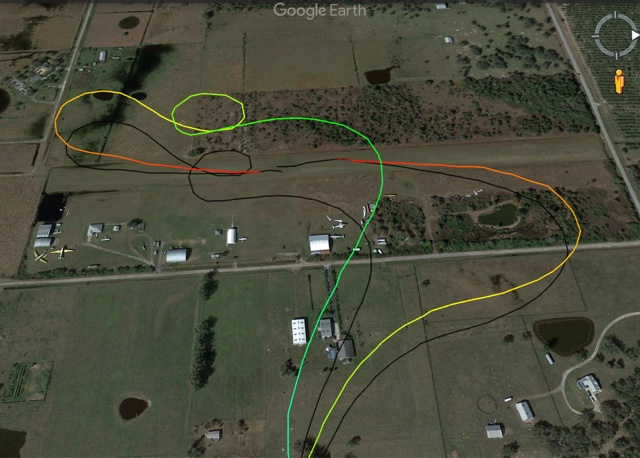 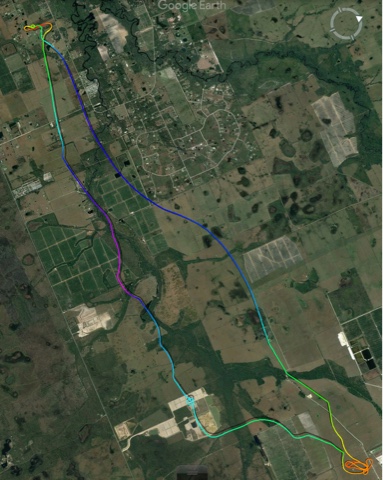 No Drama.  I installed the new A assists with the upgraded “Nite Eyes” cable cams.  They worked well.

It was 68 degrees before first light.  When I left the house it was just hazy but got thicker as I went inland, it was pea soup as I pasted Hwy 75… it was so bad that I missed the turnoff to Washington loop.  I tried to gauge the wind but couldn’t get a view of the flags, atop the derrick at the water treatment plant.  Surprisingly at the airpark it wasn’t so bad, I could see across the runway and figured that I could probably see well enough to launch and climb into clear air.

While setting up, the fog lifted slightly and I could see clearly from the surface to about 50 feet.  The wind was out of the ENE at 4-5mph.  I inflated without issue and turned down the runway launching about 70 degrees off the wind.    Almost immediately, (50ft/AGL), I was blinded by the fog.   At 250 ft the wind direction changed to ESE and I raced toward Shell Creek at 50mph.  Every once in a while I was able to get a glimpse of the creek meandering below me.  Turning into the wind I steered toward the radio tower which was the only visible landmark.

I was hoping to see through some holes to navigate but was just barely able to make out a few high contrast shapes.  At 1300ft it was cotton candy as far as I could see and it didn’t look like it would get any better,  and…. could possibly get worse.  I didn’t want to try a blind landing.  The GPS was great for flight data but as a map and navigational aid, not so much.

So… While I could still make out the where the airstrip was I turned back and circled down at the south end of the runway.  I spiraled down at 450ft/min and held my breath.  Finally, I could see Richards house from 100ft AGL.  I turned onto final and glided in.   I overshot the wing bag by several hundred feet but that was just fine compared with landing short and maybe hitting a fence.

This was a really marginal flight but I’M GLAD I DID IT.

It’s been a busy day.  Social Sailing in the morning followed by helping a club member buy some folding bikes for X-mas.  Then watching the new H20’s arrive and off to Mike’s LZ for an evening flight.  The winds were brisk and puffy when we arrived.  Mike and I kited for awhile and when Mike Otten showed up we didn’t have any more excuses.  So… Mike n Mike launched and I followed about 5 minutes later.  I don’t know,  sometimes you just don’t feel the love and this was one of those times. The air wasn’t bad, the wind wasn’t strong, there was nothing to put my finger on, it just felt wrong.  So, after about 30 minutes of flying in circles I came in to land.

This is not my favorite LZ.  the surface is big time bumpy under the grass.  It feels like they dragged the surface to make irrigation rows and the rows never washed out.   During the run out, the bumps got worse toward the middle of the field and about the time I was at take off speed I crossed some particularly bad terrain.  I could feel the airflow above the wing being disturbed and the trike losing lift.  Eventually I got up and all was good with the world.
This LZ (as I’ve said) is a bit of a challenge.  The field is ringed by wires and trees.  During takeoff I was launching into the tree rotor and on landing I had to make a short final to land into the wind.

946
Light breeze at surface, 12 mph above 100 feet …. Probably increasing with altitude.
45 minutes air time.
There was thick ground fog and low clouds moving west off shore.
The first few minutes were pretty cool.  The land was only visible through a few small holes and off to the South East the Radio Tower was poking up through the fog looking like it was 10,000 feet tall instead of 500 ft.
The moisture had started to coalesce by 30 minutes after sunrise and when it was time to land, I had no problem descending through the layer and setting down by the wing bag.

I think I’ve finally got past the string of incidents where I was breaking lines right and left.  I don’t think I’ll ever know exactly what the cause was but It appears that I stumbled onto the fix.

Good air, good tunes, and a good time was had by one.

944 was last Wednesday before Stefania came to visit.  No Drama 1 hour 10 minutes

945 was this morning.  Strong winds aloft.  45 minutes.  Hazy morning with level 4 bumps the first 100 feet. Landing was fun with very active flying all the way to the ground.