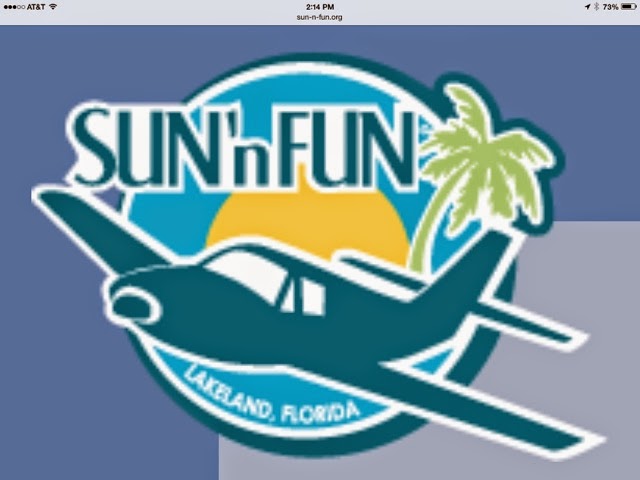 Lakeland for the Fun and Sun Aviation Expo.
Fun and Sun is one of the largest Fly In and Expos in America, second only to the big one at OshKosh.  It fills the Lakeland Linder Regional Airport and hosts a tremendous number of vendors and a huge diversity of aircraft including a fine showing of vintage airframes, including warbirds. 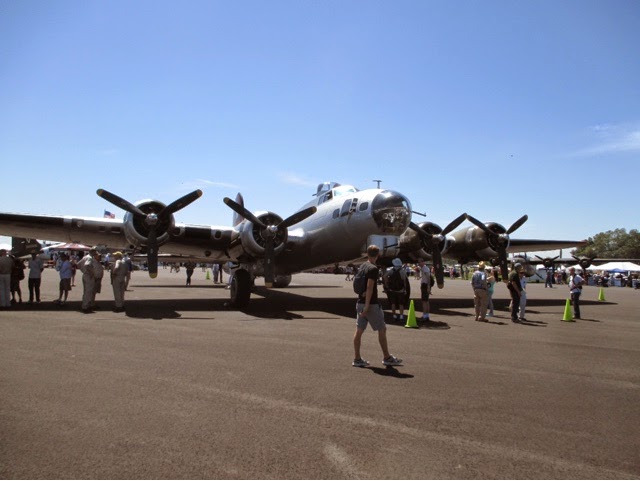 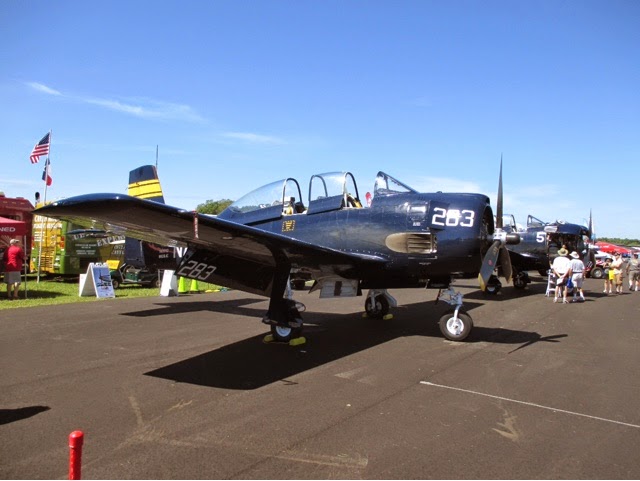 When it got too hot to wander around the field, Mike and I sought shade at the Aviator booth.  Eric  Fairwell was a great host.  Not only did he provide all the water we could drink, he also hooked us up with passes for the gate.  Eric is the Nirvana dealer and has done a great job promoting the product and the sport.  When my friend Rex Mangurian mentioned that he didn’t get a copy of the bible during his training, Eric promptly gave him a copy which Jeff Goin happily autographed.  Great Guys, I wish them the best. 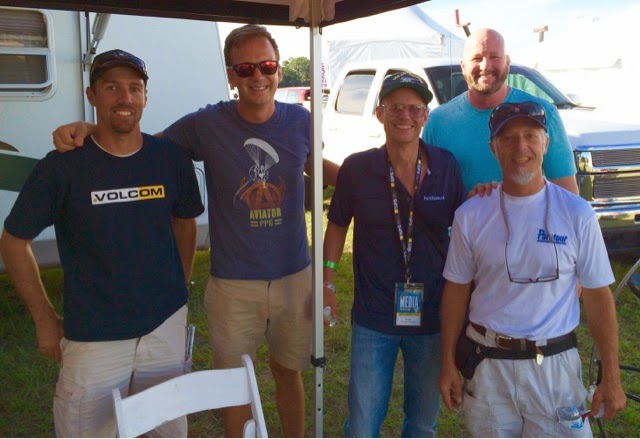 Planet PPG had a booth and Paul was in his element, giving seminars and demo flights.  Paul has recently gained control of the Pine Island Airstrip and has been busy clearing trees and making it into a premier PPG school. 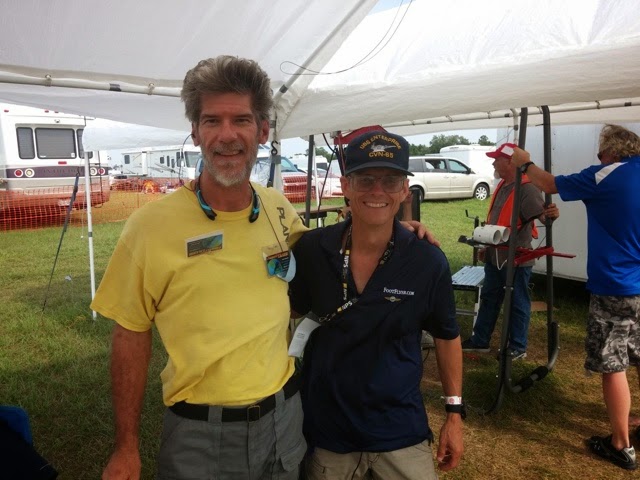 Rob Catto was there with his excellent PPG simulator, the Virtual Foot Flyer. I was impressed with how real the experience was.  Unlike a video game where the control inputs are buttons and joysticks, the Virtual Foot Flyer has you in a harness, pulling brakes and using weight shift. It allows you to swivel your head and see where you are looking. There is a turbine blowing wind in your face and the sound effect include a sub woofer that feeds vibration thru the harness.  The whole experience was increadably realistic.  When it was over, I exclaimed, “When I’m ninety,  I want one of these things”. 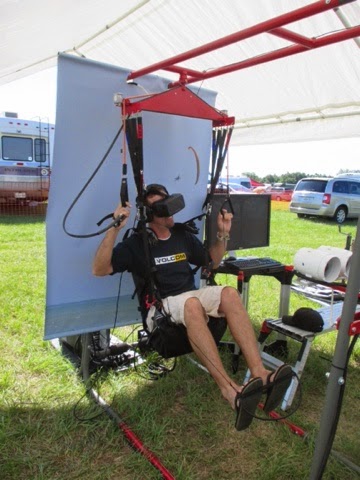 I also met Nick Reed who is building the V Twin Flyer.  Nick is a past student of Terry Lutke and is building an airframe along the same lines as the Falcon.  He has made a few changes, primarily a large castered nose wheel which I’m sure improves ground handling.  The fit and finish is very good  and his pricing is competitive.  Terry is supplying some key parts of the redrive and in typical Lutke fashion, he has given Nick his blessing.  It’s good to see that another builder sees the value of this design. 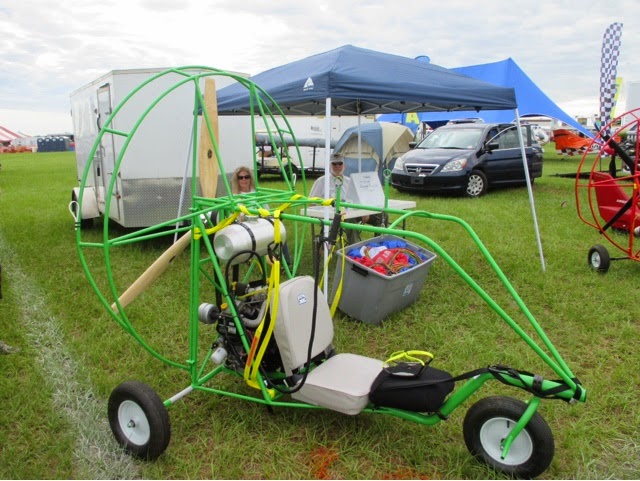 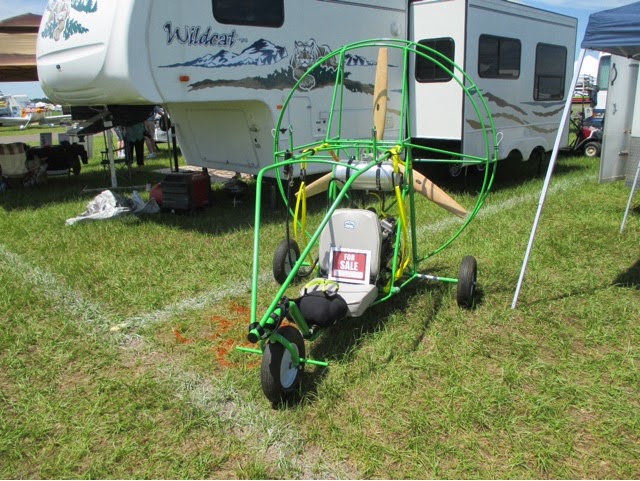 A real blast from the past was Randy Schlitter, the president and founder of RANS Aircraft.  Thirty years ago Randy owned a small bike shop in Hays Kansas and I was a manufacturers Rep selling bike parts.  Once a month I would make the trek to Kansas City and along the way I would visit every small town hardware store and try to sell a few bike parts.  I fancied myself as the Campagnolo expert and my sample bag was full of high dollar racing parts.  The reality was….I was lucky to sell a few boxes of Wald bearings and maybe a sissy bar or some inner tubes.
Randy’s shop was one of the few real bike shops between Denver and KC.  It was just a small space with limited inventory but Randy was the real deal. He read the trade magazines, followed the trends and dreamed big.   Even then, he was interested in manufacturing.  I proudly carried a RANS belt pack that he developed when he was looking into the bike pannier business.  It was ten cents of quilted fabric with a couple of belt loops sewn on.  I’ll never forget the logo. It was done in that weird ballooned font of 1970 computer culture.  Eventually he designed and produced the RANS Recumbent, which was the most affordable recumbent available. Quickly, the RANS Recumbents became a true player in the industry, with significant production and good distribution.
I remember sitting in his kitchen one morning and asking about the drawings of  aircraft that were laying around.  Some were conventional looking aircraft and some were futuristic lifting bodies similar to the modern stealth fighter.  Randy calmly told me, that someday, he was going to build airplanes. 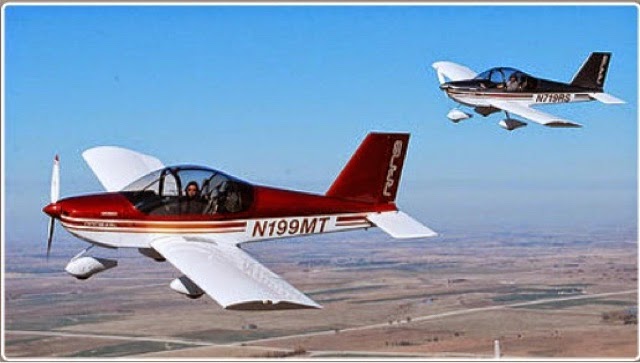 NOW…. THIRTY YEARS LATER…. RANS is a leader in light sport Aviation.
There we were, two old guys, sitting in the shade of his exhibit, chatting about the “good ol” days and all the changes we’ve seen.  He told me that he had recently sold the recumbent manufacturing business but still kept his hand in as a consultant.  We talked about the Aviation business and how it was starting to come back from the recession.  I was happy to learn that Randy is still sailing, he is looking for a new boat like the Hunter 26.5 I left in Colorado.  We made plans to hook up in Punta Gorda and sail together.
Paul C. Enlisted me to fly a demo tandem with him during the evening flights.  I was pretty nervous,  its been years since my last foot launch and I think the last tandem was with Moe Sheldon at the Salton Sea more than 5 years ago.  I was worried that my knee would fail and I’d end up embarrassing Paul by face planting but we launched and landed without incident.  Thanks Paul.
Here is a video of the launch….
https://www.amazon.com/clouddrive/share/CzGodJ8dxMWXqX0XxMTnVfoYe3Il0EL_0vDW_S1T114?ref_=cd_ph_share_link_copy_flash 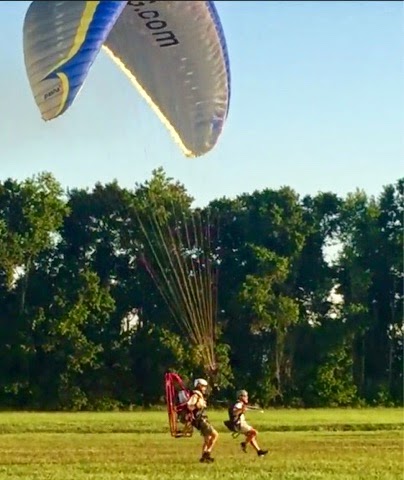 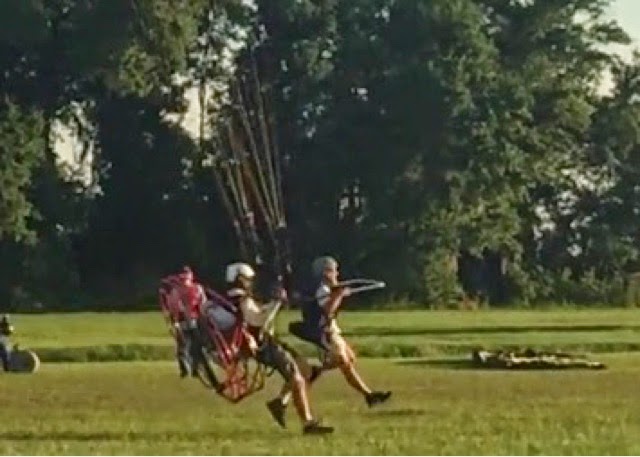 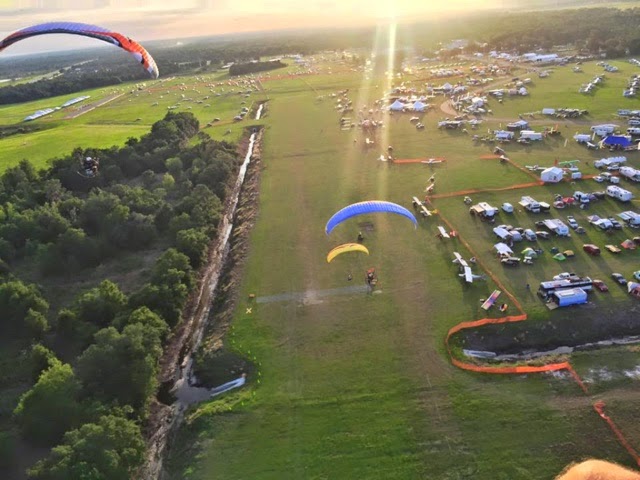 After dark there was an excellent aerobatic show with lots of LEDs smoke and magnesium flares.  Mike and I hiked back to the car with our heads on a swivel. 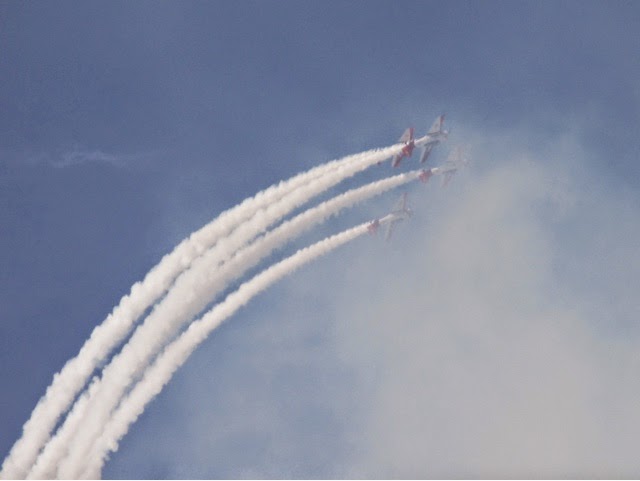 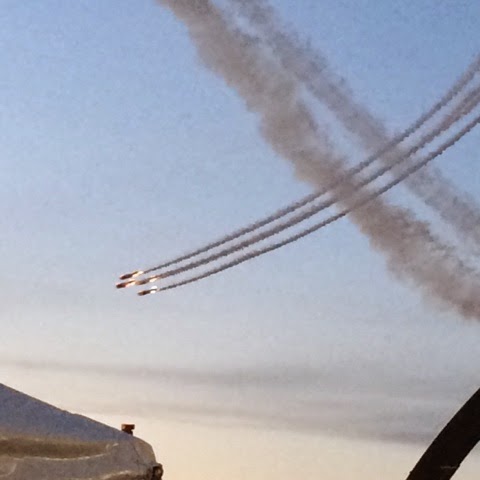 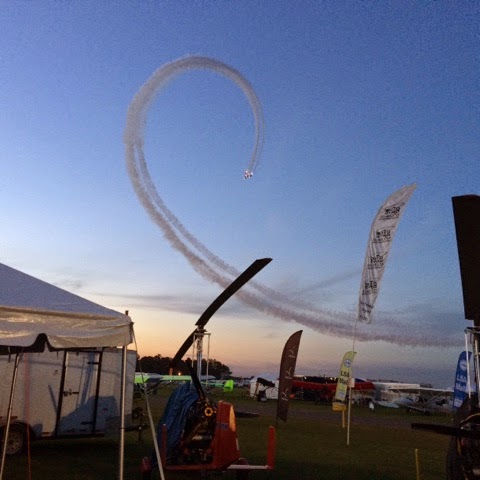 Nice calm flight.  After I landed I ran the tank dry doing taxi practice.  I’ve installed night eye brand cord ratchets on the A assists and it is a real improvement.  Instead of trying to move the tiny cam release on the old ratchet all I have to do is pull the cord and it releases. 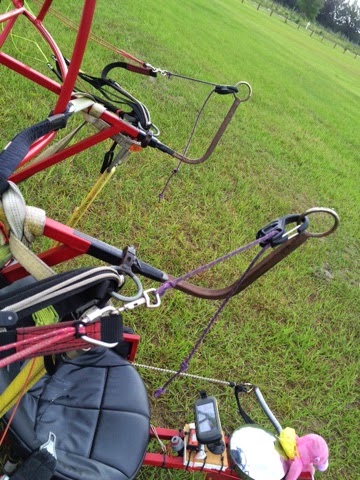 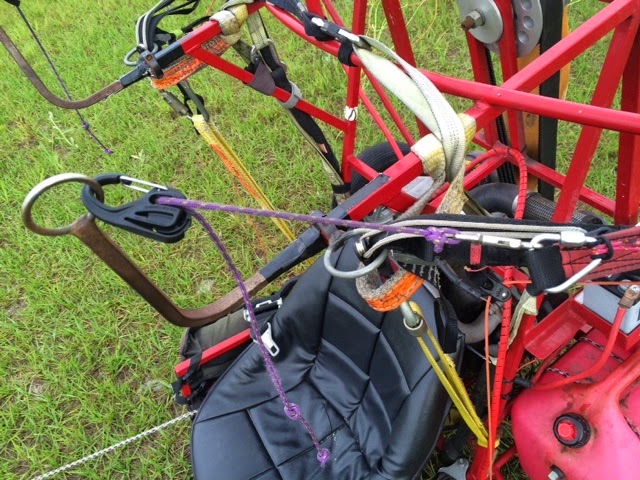 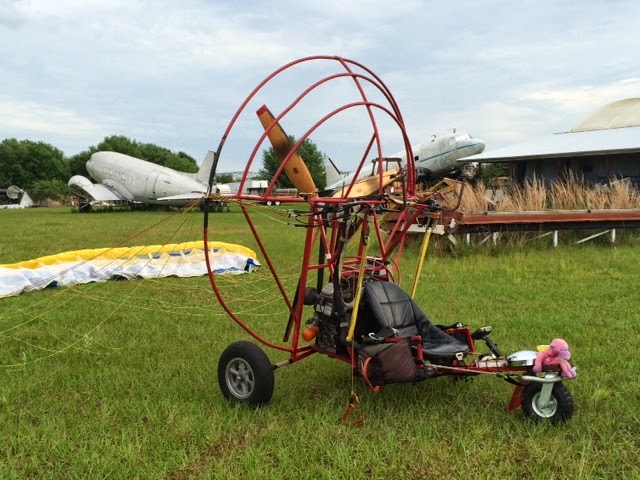 This is out of sequence but I forgot to record it.

I borrowed a 28 meter Lift from Bob Hanna and took a spin around the park.

Another picture perfect day and nice low and slow flight.

Getting close to another century flight.

No drama.  Flew low and enjoyed the sights. 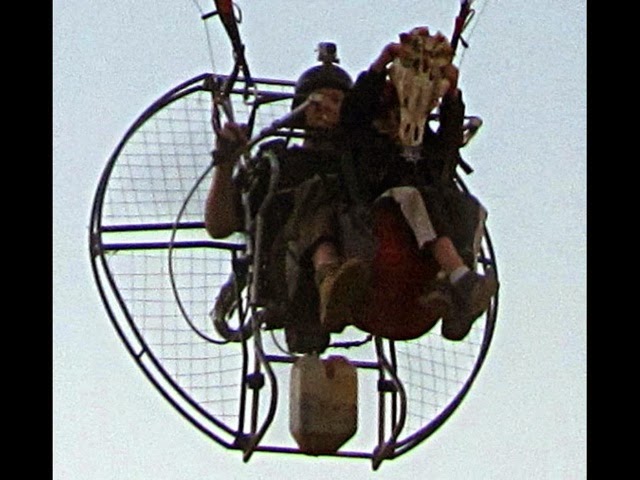 One year several years ago, during The Gathering at Monument Valley, Russ and a very young Dallin spotted a Steer’s skull on a tandem flight.  They landed, retrieved the skull and flew back to Gouldings Airstrip.  It was one of those EPIC father and son moments.
Imagine the stories that boy will tell his grandchildren fifty years from now.  Bravo!

No drama.
Spoke with the airstrip manager and got permission for Tom Spears to land and leave his trile at Shell Creek when he comes to visit.