Dawn launch, Shell Creek.
50 minutes
1200 ft.  AGL
Light ground fog.
Chase cam footage.
#953
Dawn Launch, Lake Wales Municipal Airport WOW 1017
1200ft AGL
Foggy conditions.
Hung around the airport for 40 minutes and landed when it looked like it was closing in.
No Drama
WOW was a bust.  Well, not exactly but the weather looked like it would shut down aviation after Friday. It was pretty obvious so I changed my plans and drove up Thursday afternoon.  Mike Lange and another pilot and I had a Mac Dinner and it was off to bed.  The next morning I  flew early and left after visiting a few friends.  Jeff Goin said it best in his blog post.  lots of new blood.  The most poignant moment was standing with Leon Wacker and Eric Dufore while The Aviator Staff and students put on a show for the cameras.
Notice the budding storm cloud lit by the sunrise 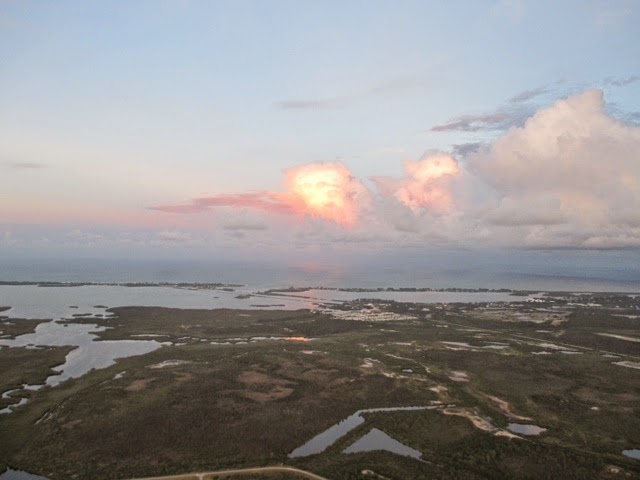 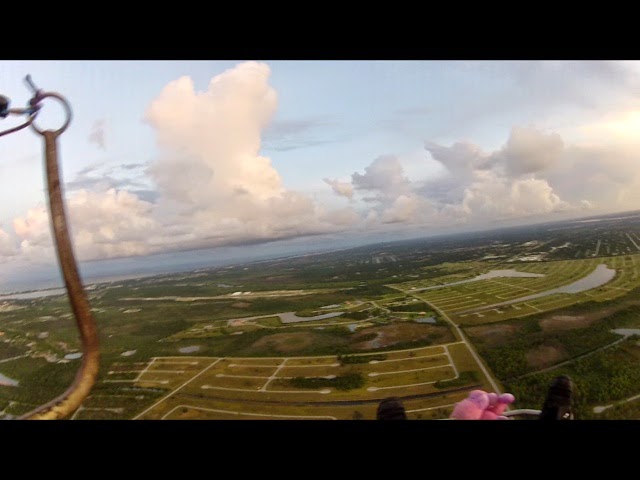 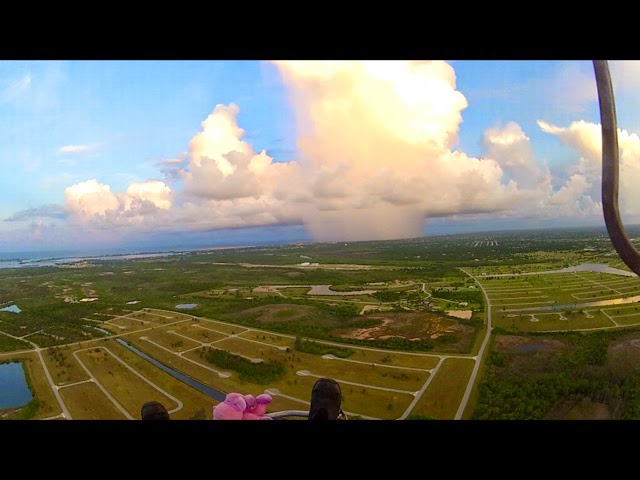 10 minutes later!
About 10 minutes into the flight I saw lighting in the north and rain coming down hard.  I wasn’t sure but the storm was possibly heading toward the LZ and I didn’t want any part of it.  So,  I went to idle and descended to land.  The air was smooth with lots of lift..  My best descent was well under 300 feet / minute and The whole time I was watching the rain moving toward me. At 200 feet there was a layer of bumps but the landing was very smooth.  Thinking I was about to get soaked, I bagged the wing and prepared to stash it in the cab.  As it turned out the storm passed to the North and the wind never picked up.  I stood around and listened for the sound of two strokes between the thunder claps that were 5 seconds away,  thinking about the old adage, ” It’s better to be on the ground wishing you were in the air than, in the air wishing you were on the ground”.   Forty five minutes later Mike and Bob returned from a great beach flight.  DAMN!
I’m wondering how the  lack of elevation changes change the way I perceive distances?  Or is it just that these particulars storms were small and localized. Or both…. I should have been better able to predict the storm’s path.  It was flowing with the ocean breeze toward the Northeast.
This is a great place with lots of open space and the streets are laid out beautifully for triking.  I’m going to return soon.
The fog was so thick
that there was nothing to do but sit in the cab and wait.

Forty five minutes after I arrived Marek showed up …. he was all charged up and ready to go fog surfing.  I did my best to discourage him while we waited for Robert.   At 8:15 it was still pea soup, Robert had arrived and seeing that it wasn’t going to change fast he and I decided to go for a cup of coffee to kill some time.  Marek ….ever hungry for a flight stayed at the field.  When we returned it was starting to break up and we were beginning to see the trees south of the LZ.

While Robert was warming his motor he discovered that the kill switch wasn’t working.  It wasn’t a show stopper but nobody liked it and we chatted about the time Jim King did a face plant at Monument Valley and John Black had to race down the runway to rescue him.  When we heard a couple of GA craft warming their motors Marek decided it was good enough for him.  His flight was 2 minutes max.   The take off was clean and I was surprised at how quickly he go off in the super saturated air but after less than one quick lap he came in for a power off landing.  Later I learned that his prop exploded shortly after take off.
I went out to set up and waited for Robert to launch.  When he blew the first attempt I took the opportunity and launched.  The wing came up slowly and the trike was even slower but there was plenty of room so I took my time and taxied a ways before committing.  Good Launch, except that I had neglected to buckle my helmet.  Damn!  Rather than fuss with digging the buckle out from under the helmet I tossed it over by the truck and continued to do laps.  The air was cool and the visibility was poor so I stayed around the field and waited for Robert.  His wing came up fast and did a forward fold.  I’m not sure what happened next but when I flew over I could see him prone with the motor running and Marek rushing over to assist.
It just wasn’t working out to be a good morning.  The air was smooth with large slow thermals creating lift south of the LZ.  Since it didn’t look like anybody else was going to fly I came down after a few more minutes.
Robert was ok but had cut some of his webbing and Marek was out with a damaged prop.  They decided to head over to Boulder for some free flight and I loaded up for the house.

Not a lot of airtime but a short flight is better than none!