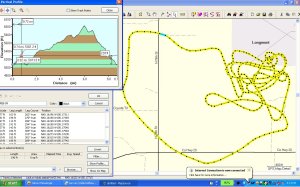 It was good to get this one past. I met Robert K and Marek M out at Vance Brand Airport.
We launched at 3pm in light winds from the North East. First attempt went bad when the A Assists were not putting enough pressure on the wing causing it to hang back. On the other launches I got on the assists manually and it came up just fine.
(change the endless clamps so the tails point into the cage instead of out where a line can get into them)
Another thing is to be sure the Starter/Tach bar is on the correct side when attaching the risers.

I accidentally killed the motor at 230 feet, when I noticed the starter bar was being pulled by the riser strap. I had time to try one restart but failed and came in dead stick. Smooth as a baby’s butt!

Second flight was great…no problems 200ft/min climb and about the same decent.

Monte’s Powerplay Sting was rock solid and the brake pressure was about what I was used to with the old rig.

Marek and I kited Brian’s wing…it is 2003… very light construction and absolutely not the right wing for this application….nuff said

I need to find a better way to hold the Throttle or get a different one. The ol fresh Breeze lever would probably be just fine.
The next time I’m going to try using light bungee cord for the A Assist to see if I can get some more pull on the A’s and not be pulled forward of the rest of the risers during flight.
One thing that has to be mentioned. At one point I hit this spot on the power band where the noise and vibration was reduced dramatically. It was eerie, for a second I thought the motor died. I think it was a combination of things including including belt slap, prop flutter, and who knows what else. It’s too bad that it was at 2250 RPM which won’t sustain level flight. But I’ll bet it would at sea level with a 62 inch prop!

This was a “strange air” day, it wasn’t really bumpy but the air had lots of cross currents. For instance I would be starting a relatively flat turn that would turn into a steeply banked downwind hook. The take off runs seemed to be longer than normal and I had to use a little brake on every flight to get off the ground. A couple of times I got into sinking air when I was inside the perimeter of the power lines and had to turn away to keep from frying myself.
The capper was the third flight when I came in for a low and slow fly-by. I floated over the LZ for about 75 feet and punched it to climb out. The engine had come up to about 8o% thrust when the motor died without a burp. I damped the surge and came down softly. One thing I have noticed about the 26 meter wing is that the landings are very easy to control. I look forward to seeing if I can do as well with the 28 m.
The problem with the motor turned out to be one of the three spade connectors that come out of the bottom of the starter housing. Fortunately the one that broke was a redundant ground wire so i was able to disengage the Master Kill circuit and route the ground to it’s connector.

Flight #105 to #125
The 2008 Salton Sea fly-in was wonderful!
This was the first time I have been to a flying event where I can truly say that I got my fill. Three days of four flights and two days of two flights…16 in all.
John Seib and I got an early start and drove straight through to Indio California, about 20 miles north of the Fly-in. There was snow and ice for the first couple of hours but as we approached Glenwood Canyon the roads cleared and we powered on until 11:00pm when we stopped at a Holiday Inn and crashed. Wednesday morning we gassed up drove to Vista Del Mar and got in a couple of flights before the end of the day. The only incidents were both non-events. Friday I had an engine out two minutes after take off. I was at 250 feet and still going down wind …no problem. I set down on the beach and called John Sieb to pick me up. It was the same wire I broke last summer during the Balloon fest…the ground wire from the go no go toggle. This time I used a little shrink tubing to protect the connection. A couple of days later my second gas cap got into the prop and parted with a bang. I was startled but no damage.

This was billed as the last Paratoys Fly-in at the Salton Sea and the absence of Michael Purdy…Jeff Goin and some others was conspicuous. Attendance was down a bit and the whole thing had a different feel than past years…There were still campfires at night and kiting wars but there was no Alan Chocolate Memorial Style Competition Somehow it was just more subdued than the past. One of the biggest differences was the large number of trikes and quads. Bob is all about selling his joint venture with Leon. The Paracruiser/Paratoys quad looks to be a winner. And I don’t think you will ever hear Bob calling the trike pilots girly girls again. The day of foot launch being the majority is going away. I hope he finds a wealthy young guy and flips Paratoys for a boat load of money. He deserves it.

John Black made a speech during the Banquet that was reminiscent of an AA Meeting….”HI I’M JOHN AND I’M A DUMB SHIT”….HI JOHN! It was a good thing he did. I guess he is a pretty aggressive pilot but I think he has seen his god. The near fatal crash had to be an eye opener and I doubt he will be doing any mid day flying again. The famous video is at the bottom of this post.

Chad is having a good year, the trike buggy is considered one of the best machines around and I know he is selling plenty. The clubhouse has opened their kitchen for breakfast and it a great time and place to sit and get acquainted. Chad brought his wife who is a delightful woman out going and cheerful.
Bob Armond was also at those breakfasts, drinking coffee and swapping stories. He wasn’t as stressed as years past… he did look tired. I was touched when on the last morning I approached him to purchase an emergency stuff sack and he refused my cash and gave me one as a gift.

I did some trading and am now the owner of an Eden III 26m wing. It has about 100 hours on it but it’s in great shape and the same colors as my first wing. It handles much better at this altitude and I expect it will be real sporty back home. I slept better because of a new air mattress arctic sleeping bag. Food was more plentiful because the club house opened their kitchen but I still ate way too much junk food.

John Black’s Wild Ride
//www.youtube.com/get_player
Motor Out!
Take off was a normal early morning launch. I was heading to the Balloon Port and approaching the crook of Chatfield Res when the engine died. I tried several times to restart but gave up and landed in a field of tall grass. It must have been 5 feet high and almost caused a hard landing because I didn’t realize how tall it really was and flared a bit early. I hitched a ride to the port and Alex gave me a shuttle out to the truck. When I got back to the park Bubba quickly diagnosed the problem as a broken wire which we repaired immediately.