Nine Hundred and Ninety-nine times out of a thousand

It started with dog piss in the shower and continued to go south the rest of the morning. While unloading, I discovered that the battery was dead. The wind was light and forty five degrees off the runways. The plan was to launch into the intersection and turn down the runway. The wing was a little behind my turn and the outside tip steering line caught the top of the stop sign and popped the tip right off. I felt it and immediately aborted. I honestly think I could have hammered the throttle and launched only to find myself flying a badly compromised wing. The left side would have had very low pressure and who knows what would have happened. Anyway I aborted and the only damage was to wingtip and a couple of lines.

Elisabeth is months out and Paramotor City is 6 weeks, so it’s going to be awhile. Tonight I picked up a Paramania Revolution 36 for a decent price. It’s a couple of years old but very low hours.

I was worried that 1000 was going to be underwhelming … the wait is going to make it special.

Today was a milestone.  My first student got his first flight 🙂
Arrived at the Placida LZ at 6:30.  Winds were 7 from the NE, cycling every couple of minutes.
Tony set up and launched perfectly.  He flew for 30 minutes at 500 ft.  The winds were strong enough at that altitude that he was just barely penetrating.  Landing was excellent. 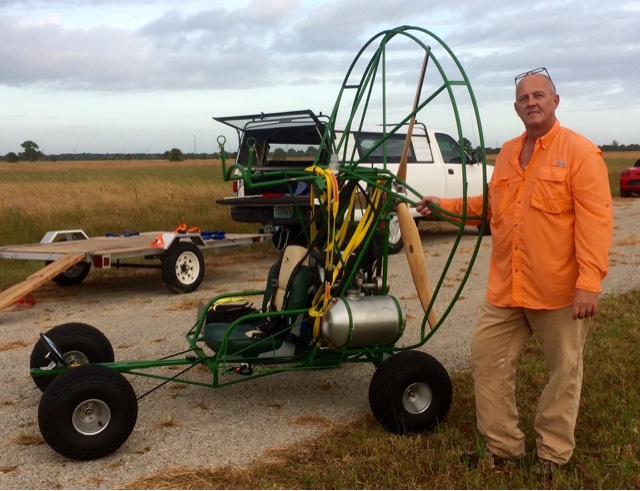 Notes:
His belt needs to be tightened.  It was slipping a little and made his climb-out too slow for my taste.  I could hear it squealing and possibly slapping although I don’t know how it could slap with a pulley on the slack side.
He needs to practice with the kill switch … He had a little trouble finding it and killed the engine late.
I’m going to encourage him to transition to trike.  The rig was bobbling too much for comfort.  I think those big wheels up front are catching the air.
I’m glad this phase of training is over.  He’s finally popped his cherry now and can start gaining experience.
This was a good one.  I woke up at 5:30 without an alarm.  What’s to do ?  While performing morning ablutions I checked the weather and saw it was calm with nill winds expected.  I arrived at the field at 7:00 and was airborne by 7:10.
Fabulous Air! I climbed out over the sand quarry just as the sun was rising. There was ground fog in patches for as far as I could see.  The sky was clear to the East and the clouds that we’re building were all to the West over the gulf.  The winds were light but increased steadily as I climbed.  When I reached my goal of 5280 it was 20 mph from the Nort North West.

At 5333 I trimmed the wing to full out, fast reflex and shut down the motor.  It was wonderful, I pulled a few wing overs and finished with a hard spiral descending at over 700 fpm.  At 3500 feet I restarted and climbed back up to 4500 so that I could shut down again and glide back to the field.  The landing was clean, I pulled in the trim at 100 feet and put it down dead center on target.  Sometimes things work just as they’re supposed too.

On funny thing that happened was a glitch in my sound system.  For some reason I select only songs that were stored on the IPhone.  At first it was fine but when Dianne Reeves cut out and restarted two times I started to get annoyed.  Eventually it went silent which was just fine with me.  The crazy thing was that when I reached the top and shut down the engine the tunes came back on with a vengeance.  All the way to touch down I listened to Queen finishing with “We are the Champions”
It wasn’t epic but it was wonderful.

There was a low ground fog that dropped the surface temp 10 degrees to 65*.  Nil wind.  Set up at the edge of the field and launched without drama. One the hour flight.  Loitered over the mining operation and climbed to 2700 feet.  Few birds and very little activity. 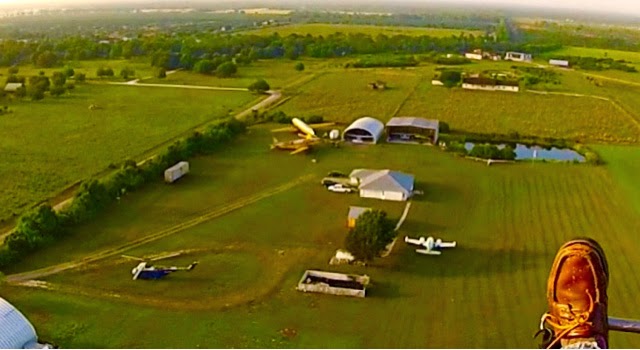 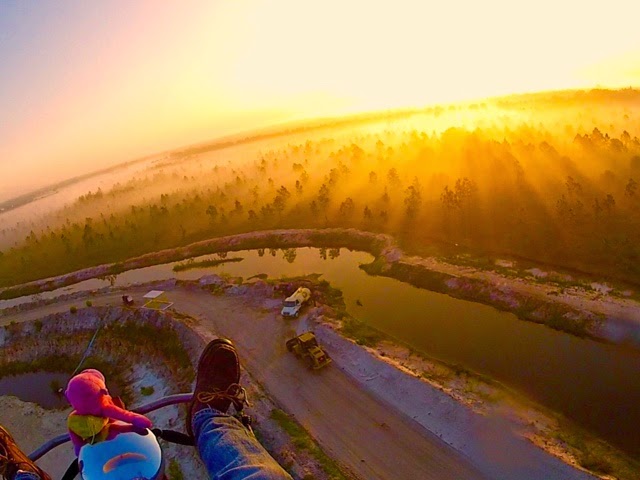 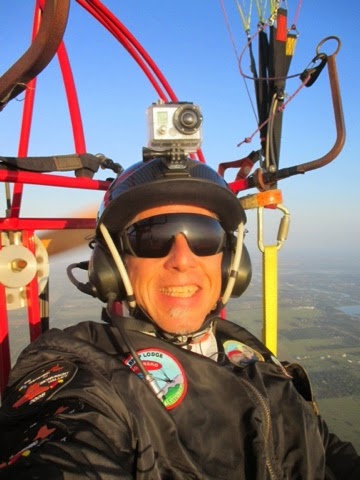