Skip to content
My dear friend Marek Kozlowski has put together a compilation of last years flight.  Well Done Bro!
Remembering 2011 from marek kozlowski on Vimeo.
It was cool and there was almost no wind when I arrived at the field.  The first flight was uneventful, I played around for 30 minutes and finally landed when I couldn’t feel my fingers.

The second flight was almost a disaster.  Once again I didn’t notice when the trim cam was below the hang point loop.  The wing pulled hard to the left as soon as I started the runout and I almost crashed into a picnic bench before I slowed down.  In fact I popped up for a second to clear the seat of the bench and the rear wheel struck the seat. I pitched forward and swung back just in time to land.  My Lucky Day…. no damage except for cracked fiberglass strut.

It was great today. Went flying the hill at 10:30 with Marek and Jerry. Marek flew his Wistler 2, 14M from the top. Light 2 MPH wind from the east. Boy did he run. Jerry and I flew from the medium launch. Great flights. Started to snow lightly by the time we landed. Headed out to Longmont to meet Joe O. Jerry made his first 2 flawless flights in 2 mph conditions with great forwards and on his second flight Marek joined him on my Spice 22. They looked like they were having fun carving it up. Jerry is a natural and landed with the hugest smile both times. So please welcome Jerry Patton to the Flock. He will be a fun addition beside being a great pilot. Now we have to ponder what wing he should buy. He already outgrew his Aeros Vitamin 30M student wing on his second flight. I’m thinking maybe a McPara Chronos 25M??? How about you Mike?

Flying
An unusually warm winter day and glassy air was just to good to pass up.  I stopped at St Marys LZ in hopes of an early lauch, but the field was still wet and muddy so I went North to Vance Brand Airfield.  No wind takeoff was smooth and so was the air.  Last weeks shop time payed off handsomely, there was no belt slap and the vibrations were reduced significantly.
There were a couple of small GA guys practising touch and goes and one overflew me a bit close for comfort. I didn’t think his vortex was going to be terrible but I banked and dove just to be sure.  When it hit I had a one third collapse that popped out quickly.  I was at least 150 feet away from his flight path and 200 feet below so it was surprising that I felt any turbulence.
The wing wanted to turn to the right so I will remeasure and move the Riser loops again.  Terry’s suggestion was probably right but I over did it when I moved the left loop forward.

I toured the area away fron the pattern, did a few touch and goes and landed after 70 minutes. 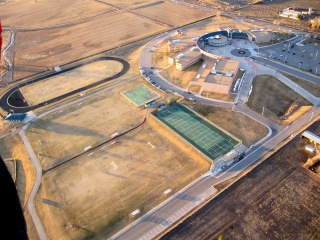