(Paul, Ranger Bo, Joe, Jerry)
What a great afternoon!…At one o’clock I was in the office looking at the sky and pacing the floor. It took ten minutes for me to make up my mind and abandon the store to Mike. I was home by 1:40 and dressed loaded and on the road by 2:00pm. At 3:15 I was pulling in to Springs East watching a whole bunch of guys playing the low and slow over the LZ.
Most of the PPPPG Club were there and Mike Bennett and I made up the Denver contingent. Once again the air was perfect, smooth as glass with the only bumps coming from the wings in the air. My first flight I used the east taxiway and blew the first launch when the wing came up very wild. I’d like to think that I snagged a line on a weed since there a few likely suspects that had grabbed lines during set-up. Jerry gave me a hand setting up and the second attempt was smooth. Lots of banking and playing with the trimmers out. The PPS felt good and I could have used either wing but I’m liking the feel of the PowerPlay with trim out. Gotta find a way to rig the Eden III so I can reach the brake pulley with the trim out. 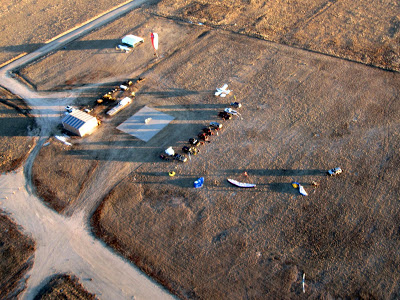 John had his Kawasaki “Beast” mounted on a quad and was able to fly it even though the prop was way too small. For a time he worked with Juanita pulling her on the quad with his vehicle.

It looked awkward but she was able to get it inflated and feel the wing without having to worry about the prop blending the wing. At one point I was on final when he started backing into my path. No worries… I didn’t have to land … so I climbed out and played a while longer.

Later on the ground I caught up with Bo, Jerry, Paul, and the rest. There were some of the new guys (Robert & Ned?), that I knew from the forum it was good to meet them and put a face with the internet persona. WOW…Perfect weather on a day when a bunch of us could get off… We might not get another day like this till Spring,

Today was one of those beautiful clear fall days.

I got to the field at 2:00 and Paul Dillon showed up shortly after. We stood around and chatted for a bit but both of us were itching to get into the air and even though it was early we agreed that it was flyable.
The wind was light from the North and almost in line for me to use the runway. However it wasn’t perfect so I set up to inflate into the wind and then turn 30 degrees to taxi down the runway for a moderate crosswind takeoff. It is always a pleasure to roll out on a smooth surface so I had plenty of motivation to attempt a bit of cross wind. Instead of using the exaggerated chevron I set-up a normal wall to get the wing overhead a little quicker. It worked and I was off on a nice long birthday flight.
I stayed in the area going as far east as the gun club. The air was smooth even this early in the day. 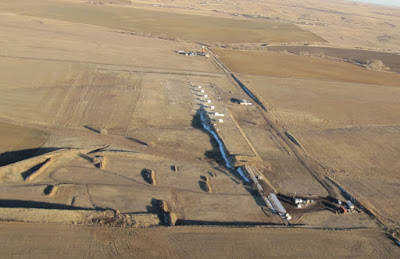 Paul and I tooled around each other for awhile . Then I spent a good 40 minutes just boating around. There was a small group of antelope but I stayed high and let them be. There had been 4 or 5 jets passing directly over head as they climbed out of DIA so we both stayed below 1000 feet. When we landed the wind had come down which made it a little more difficult for Paul who prefers to reverse launch into some wind. He decided to call it good with the first flight. I gave him a MV 2009 patch and cap which he insisted on paying for.
It was still early with a good hour till sunset so I took a second flight that took in most of the sights…the gun club…old radio tower … and I climbed to get a good look at DIA and Buckley. 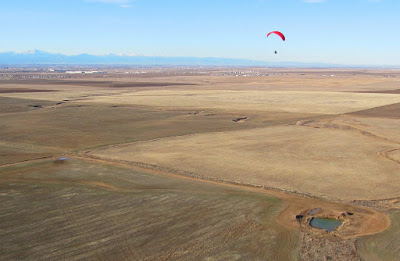 What a beautiful way to enjoy Thanksgiving and my 5th Birthday Flight …
warm… clear…quiet.

This afternoon I checked out Simms, it is covered with tangle weed and worse there are new “No Trespassing” signs posted at the entrance to the field. It’s looking grim…I might be able to find a place to launch over by the school but probably not for long. With Titan and Simms gone all that is left is Snowflake and the Southern sites. What a drag…I have to find some place close to home. 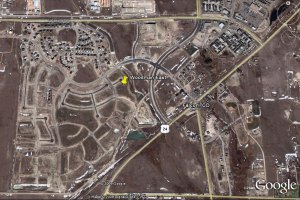 This was an off day. I met with Kevin on the corner of Woodman & Markscheffel, it was too wet and muddy so we went to his 2nd choice which they call Falcon Walmart. I’m sure it was a better site a year ago but the construction has continued and the field we selected wasn’t that big. No problem for foot launch but a little tight for me. The field has recently been cut but the cuttings were still there and perfect little chunks of tangle weed.
The wind was fresh from the South and while we set up it shifted slightly to the east. My first launch was aborted when the throttle cable snagged a line and I couldn’t get it free…even with the wing mostly loaded. There wasn’t alot of room to fool around so I aborted before I got too far down the runway. While I reset Kevin took off and soon I was ready for
#2 This was a mess…The wing came up fine but my acceleration was poor and it fell back. I tried to save the launch. Big mistake… The PPS will not come back up unless you have control of the A’s. I’ve been thinking of reinstalling the A assists and this would have been the perfect time to have them. I would have probably got the wing back overhead but what happened instead was …the wing fell back and caught in the propwash, it pulled the buggy back and turtled. Fortunately I was able to kill the engine quickly. The cage was tweaked a bit but the spinner and soft damp earth saved the prop.
Kevin landed and encouraged me to try again. I wasn’t too keen after two bad launches but the air was good. So…I started the motor to be sure the prop was still balanced and tracking clear of the cage. The motor came up to 3600 but I couldn’t get any more.
#3…The wing came up clean and started to overshoot but I added some brake and accelerated. The run out was long and I barely had enough room but eventually I got up and started circling the field.

Climb rate was lousy and I noticed that the RPM’s had dropped to 3400. After several laps I started to get some altitude. The air was good with just the slightest currents. After 10 or 15 minutes I did a fly-by and landed. It was a nice landing, with a low & slow turn just before final and a 3/4 throttle gentle landing.
Kevin…thanks for the ear plugs!
Today I dressed for cold weather but didn’t need to. The gloves I selected were not nearly as supple as I thought, it hard to handle the lines and when I had to reset twice I was clumsy and hot in the “snow suit”. Next time …set up the wing ….test fill it … then put on the heavy clothes.
To Dos…
1)Add washers to the cruise control nob. DONE
2)Check the PPS for snags and debris…check the mallions on both wings
3)See about pulling the cage back into round.
4) Rig the A assists for winter flying
5)Check pitch of the props
Taking down the windsock for the “last time” at Titan 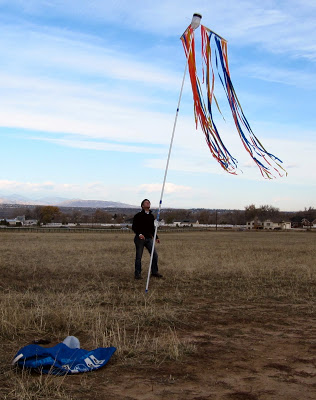 Greg and I met at Titan, we watched Steve Alley launch from his house shortly after. I thought he was going see us and land but he turned North West and that was the last we saw of him. Later I found out that he had flown to work. “Lucky guy” to have an LZ right next to the fire station.
Before we were able to set-up and launch the fellow from RUSH Soccer came along and told us we couldn’t fly from there. He let us go today… but “NO MORE”. He claims to still own the land but also said that he was not going to build a soccer field because of some zoning issues. So… for the time being Titan is closed… Steve and I have to check on some issues with Douglas County Zoning and the ownership of Titan…perhaps something can be arranged so that area will still be open to us. 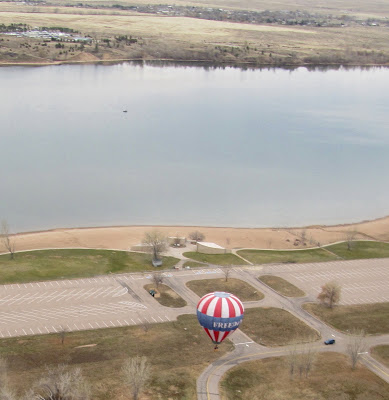 Two flights, the first was 30+ minutes. I flew over to the balloon port and checked out the corn maze. Both times I crossed over the inlet to Chatfield ..it was bumpy. I’ll never forget that place because it was the site of my worst collapse. I tried it at 1000 feet on the way in and 500 feet on the way out, no difference…bumpy as hell but worth it because I was able to check out the balloon. It hovered close to the ground for a long time and eventually climbed to about 1500. The air over the port was pretty calm but it was a fresh Easterly closer to the hogbacks. 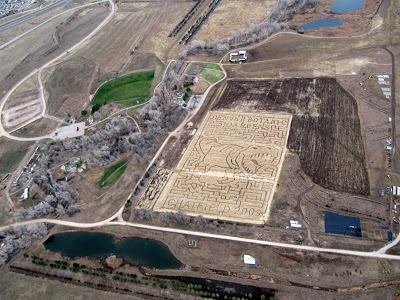 My hands were really getting cold so I landed and put on the heated gloves. They are a pain in the ass and bulky as hell but my hands were warm.
The second flight was shorter. Lots of sinking air on takeoff and getting whacked shortly after liftoff kinda took the joy out of the flight. I lapped the field a couple of times ….went North to find smoother air and when it was looked like the conditions were deteriorating, I landed back at the truck. For awhile the winds picked up and a few small gusts blew through but to mellowed and I was wishing that I had not put the rig away while waiting for Greg to land. He got in a marvelous flight, well over an hour and a half. Got behind the hogbacks and covered lots of ground.
I’m thinking about talking with John Fetz about putting winglets on the prop blades, He seems to think it will ad significant thrust it will be interesting to hear what Terry thoughts are. 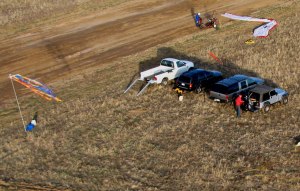 Garmin C-176c if starting to loose it. Shutting down for no reason

Plenty of thrust good climb…maybe the Atmospheric Density is helping me. It was 50+ degrees.

I missed out on the cross country out to Aurora Airport …I’ll pay attention next time!

Another good day. John Sieb was climbing heading East when I arrived. The wind was light from the East. I launched quicky to lots of lift all the way to Chatfield. It was smooth most of the flight but on return to the LZ it started to get bumpy and I landed after probably only 20 minutes and John was down 10 minutes later. He had gone to 8000 and mentioned that it was getting rowdy for him as well. I was going to say that this was one of those exceptional uneventful flights where absolutly everything worked as advertised. … but…when I got home and downloaded the video….It stopped recording 10 seconds before the landing…Will I ever get it right?
Everytime I land at Chatfield without getting hasseled I smile because it means I have at least one more flight before it’s closed to me forever. 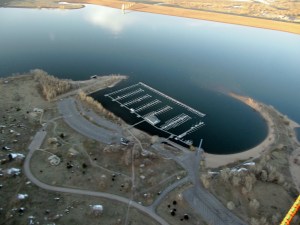 Smooth air was the word tonight.