The Bone Island Regatta is actually 2 races. The first race is A southern sprint from either Naples or Sarasota to Key West. The second is called the Return to Reality Regatta and it goes north back to our respective starts.

Playmobil, was a C&C 110 out of Punta Gorda.  On the Tuesday prior to the race, the owner,( Jay Nadelson), and I, delivered the boat to the Naples Yacht Club. We left his house Tuesday morning shortly after 7:00am and mostly motor sailed.  We arrived about 5:30 that evening.  Don MacAlpine kindly provided us a shuttle home. During the delivery I had time to explore the boat and spend a few minutes on the wheel. Playmobil  features V-Pro sails and a carbon rig. It is a serious racing boat with a beautiful cabin and lots of amenities.  We made the Naples Jetty about 5:00p.  The canal has a 30 mph speed limit and it seemed like every other boat was wake-ing us.  I was reminded of Rodney Dangerfield in Caddy Shack,  wrecking havoc while cranking and banking around the Yacht Club, The difference was…. we were the ones, getting, “No Respect”.

During the start I watched our competitors, Fancy Free and Southern Cross.  Southern Cross is a Mereck designed 46′, it sported a tall rig , and a center mounted grinder?  Fancy Free is about the same size as us with an expensive suite of Carbon Sails. Both are faster boats that owe us handicap time. Southern Cross owes 1 1/2 hours and Fancy Free 15 minutes for the first leg.

The skipper of the Southern Cross is a big boxy guy with a mop of blond hair,  I decided, for no good reason other than from what I cold see from 200 feet. That he was might try to bully us.  No good reason, except that it seemed to fit and as the race progressed my initial impression proved correct.  The start was clean, with Playmobil getting off first, Fancy Free second and Southern Cross not far behind. No question about it, Southern Cross was a fast boat and it passed both of us shortly after the start. Fancy Free on the other hand is a pretty good match and we paced each other until nightfall.

That evening a beautiful full moon came up and the winds came down. We struggled through the night to keep the boat moving. Jay and Bob had the first watch from 8 till 11.  Don and I went below to rest before it was our turn.  I was awakened about 10:30 when Jay lost course and spun the boat.  We all joked about losing situational awareness and sure enough, I made the same error a couple of hours later.  One minute we were drifting along counting our speed in yards per minute and the next I was pointing 180 off course in irons.   Looking back, I should have called for some help and set the whisker pole to maximize the little air we had.  I don’t think it would have won us the race but it would have made driving the boat a little easer.

When the sun came up, so did the winds. At Sunrise, we were closing on the entrance to the North West Approach.  It’s a tricky narrow course and it was hard to see the marks. Against an 11 knot wind, we made 17 tacks, with the big Genoa, to reach the finish.  This was the best sailing of the trip.  The four of us were in good sync and every tack was a little better than the one before.  The finish line consisted of three people standing at the sea wall with a flag,  I smiled when Bob Sween calmly announced that he could hear the screaming of the crowds. 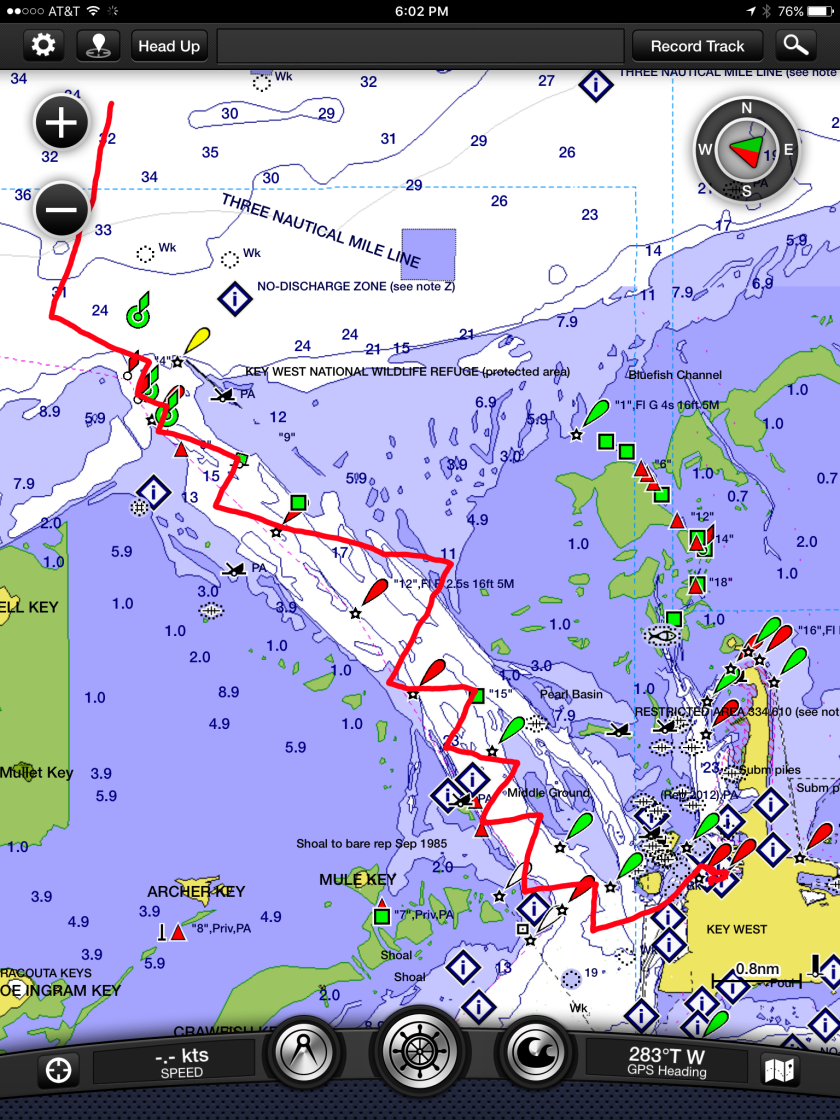 We lowered the sails and made our slip at the Galleon Marina. After putting the boat away the four of us shared a dockside breakfast.  The big question on everybody’s mind was how we placed.  What had happened after dark?  Were the others caught in the same black hole as us?   There was no sign of Fancy Free or the Southern Cross, we assumed that they had finished before us, But…….by how much?  We broke as a crew to pursue our own devices, but not before making plans to meet at the Regatta Party later that evening.   After a little housekeeping, I rented a scooter and cruised Duval Street.  Key West seemed so different to me compared to the last time I was here. The streets seem smaller and I could barely recognize some of the more popular clubs and bars. I’m sure they were exactly the same as before.   A lot of water under the bridge.  So many issues have run their course and resolved.  Not to say everything is perfect,  but my head is in a much better place than my visit in 2010.  Its all good. 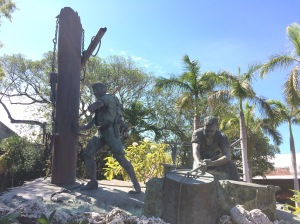 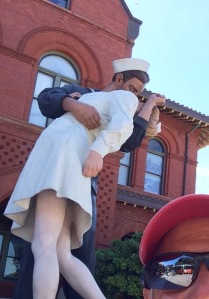 On a whim I stopped at a couple of dive shops and ended up booking a dive for the next morning.

That evening we had cocktails at the Galleon Tiki Bar and dinner at the Commodore Restaurant.  We were entertained by a table of Irish Gents in their cups. After most excellent lobster dinner I motored my scooter around and enjoyed the energy on Duval St.  Its like no other. The walkways were as dense with visitors as Vegas or Bourban St. in New Orleans and there were a few drunks stumbling around but Key West has a flavor all it’s own.  I like it.

Awake at 6:30, I quickly pulled together my stuff and walked down the dock enjoying the dawn and sniffing the air for fresh coffee.   I found a seat by the walk where I could watch some sport fishermen preparing for the day.   At 8:00 I checked in at the dive shop and picked up my dive computer.   The first person I saw was an elderly guy in short shorts and bandanna. I guessed he must be OK, because even though he was moving slow you could tell, he knew, what he was doing and where he was going.  A few minutes later the skipper arrived and we selected my gear.  Its all good!
During the dive briefing, I discovered that this wasn’t just a small wreck in 30 feet of water. The Vandenberg is a 10,000 ton troop transport 522 feet long and 72 feet wide and 100 feet tall with a 25 foot draft. During its last deployments it was configured as an Advanced Range Instrumentation Ship (ARIS) with three large antennas topside. It was sunk in 2009 to create an artificial reef in 120 feet of water.
We were lucky, there were only 6 divers booked  and the boat could hold 30 plus.  The older gent mentioned above, turned out be Denny, an 82 year old with many hundreds of dives. He is a legend around here, and Franco Piacibello, also a Key West legend, a master photographer and well known saxophonist.   The other divers were Claudia and her husband Ray who were from the D.C. area and two other gents I didn’t get to know.  Franco asked and I planned to dive with him but shortly after getting into the water the master tugged on my fins and indicated we should Buddy up.

We descended to 30 feet and picked up a line that would take us to midship. I let some air out of my BC and holding the GoPro in one hand and the decent line in the other I began to glide down toward the ship.  Wow! There it was. Visibility was good but not good enough to see the entire ship.  We  arrived slighty aft of midship and headed toward the Kingpost that was the highest point.  Descending toward the balloon launch deck I flew over the massive radar discs.  The outer skin was gone and what remained was the skeleton of disk, it was covered with growth, and looked like the product of a giant, obsessive compulsive sea spider.  I followed the master diver along what might otherwise be called the lido deck,  to an open bulkhead a third of the way to the stern. We entered a large open space that spanned the width of the ship.  I think it was the Balloon hanger.  At one end there was a second level and half of it was open to the sea overhead.  On the port side there was a 80-100 pound grouper hanging out, he slowly exited the ship as we approached. From there we passed through the Balloon Hanger to the gym space. Then we reentered the ship and followed the corridor and stairs down to the carpenter and paint shop. It had been stripped of everything except a bench bolted to the center space.  I hunkered down and spent a little time using the flashlight examining the area.  There were the beginnings of stalactites hanging down from the ceiling.  Right now, it was just pliable sea growth, but I could imagine, if left undisturbed, it could grow into something to behold.  There was a workbench bolted to the floor and I envision the sailor standing there working on a project.  The master diver beckoned and I followed him to the far side opening. Once outside we followed a flight of stairs up a deck to another space where I could see light from several large openings.  We slowly worked our way down and through the ship traveling toward the stern.  After crossing several frames we emerged below the fantail through an opening by the transom.  From there we moved back to midship where we picked up the mooring and made for the surface. Bottom time was 17 minutes at 102 feet with a 10 minute decompression stop.

The video is mine….

the stills were shot by Franco.

I got the Sketchy…He got the Beauty. 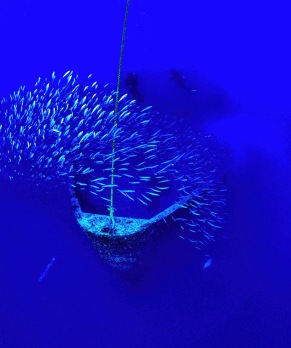 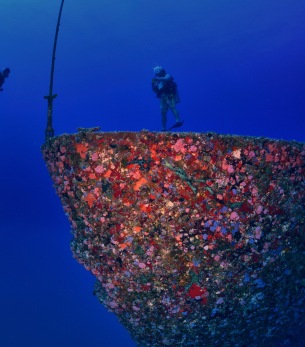 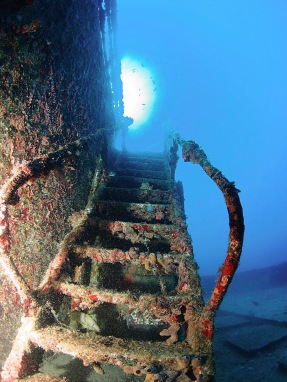 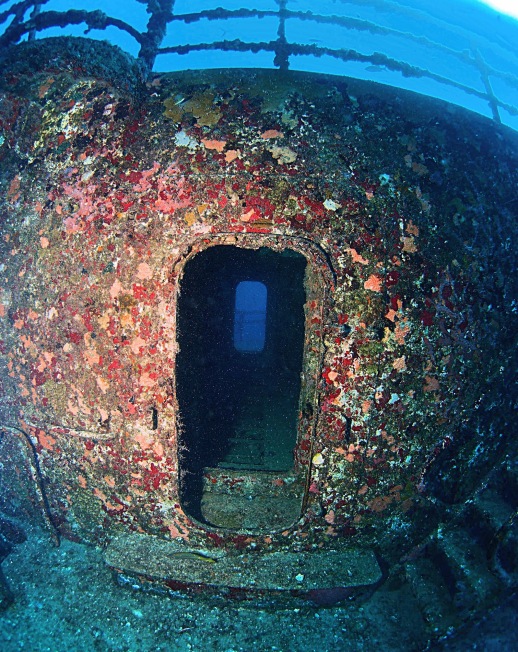 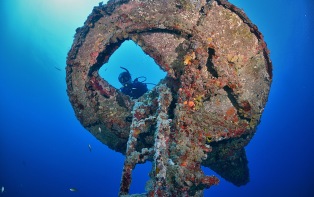 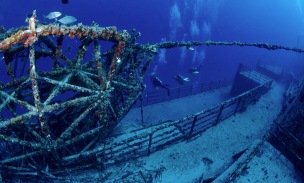 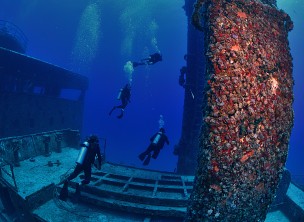 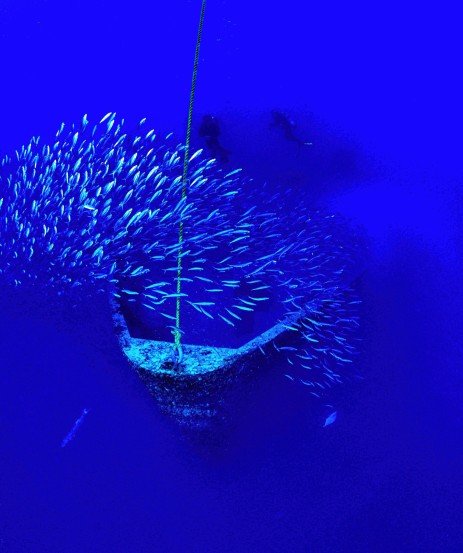 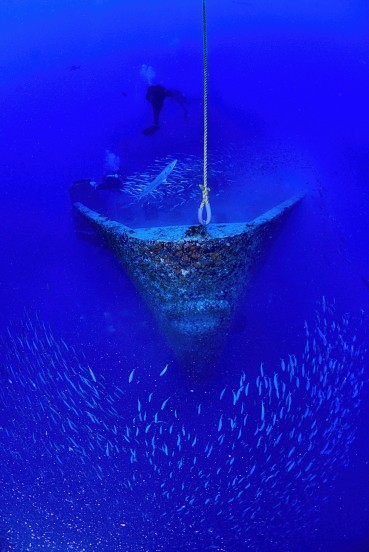 OLYMPUS DIGITAL CAMERA
The second dive was much like the first except that we explored the forward areas of the boat. Some penetrations were surprisingly tight, with narrow corridors and lots of 90 degree turns. At one point the master handed me his light, I didn’t know why but was happy to have it and kept it mostly on the master as he led me through the labyrinth. I remembered reading of deaths in sunken ships. How divers got tangled in fallen wires or wedged into a space they couldn’t extract themselves from.  I was breathing like a steam engine on the first dive thinking about all the ways I could kill myself but by the middle of the second I was back to sipping air and enjoying myself.  This ship was safer than most wrecks, before she was sunk the Vandenberg was completely stripped of moving hardware, all the bulkhead doors were removed and the wires had been pulled. There was no glass to debris to complicate our dive.  One diver called it an underwater “Jungle Jim”, and while I think I’m beyond playground equipment I certainly enjoyed this one!

GoPro footage is mine.    The stills were by……Franco Piacibello, Key West Legend, Musician and Photographer extraordinaire.

Stay tuned for the Return to Reality ……..