Skip to content
Foggy day.  The first launch was aborted at the last minute because I was running out of runway and the fog closed in.  I reset and waited twenty minutes and launched into spotty fog.  I could see that it was going to be totally socked in quickly.  Even staying over the field was a challenge because There would only occasionally be a hole that allowed me to see through the fog to get my bearings.  The first time I set up to land I was too high and I had to circle around to the north end of the runway.  The second time I was lower but the fog was almost a perfect white out.  Just as I was about to give up and climb back over the fog I saw the trees on the West side of the runway and I followed it down to the surface.

The rest of the day was spent with the CSYC guys sailing on Charlotte Harbor.

This morning at 4:47am, my darling bride woke up smelling gasoline.  Fearing for our safety, she prudently woke me up so we could search out the toxic fumes that would  snuff our lives if not discovered.
No obvious culprits presented themselves.  I opened the sliders and we moved to the garage thinking perhaps a fuel can had spilled.    I had my doubts but Dawn was sure the cause of the odor was coming from the bed of my truck.
Well… There was nothing else to do, I opened the garage and rolled the truck under a clear, calm pre-dawn Sky.  With the offending vehicle out of the house the danger was past, so, Dawn went back inside, and hopefully…..back to bed.
I climbed up into the back of the truck and checked for a gas spill.  After all,  I had a brand new wing and I’d hate to damage it.
An exhaustive search turned up nothing.  No gas …. No oil … Just my Paramotor and me under the Stars.  Did I mention that the air was calm and that the sun would be rising soon?
Total flight time 105 minutes.
The flight was great.  Unlike yesterday, I had my lucky camera ready to go and even though the wind was out of the East, there was enough of a southerthly element for me to set-up  for a crosswind launch on the runway.   I flew East 9 miles with the trim out and came back crabbing 45 degrees off the wind.
Damn that was nice of her.  Looking out for our safety like that…..
All the way home I thought about rigging something that would emit a strong gas smell about 90 minutes prior to sunrise.  You know….. Something Wireless.

The best way to describe this flight was …. I don’t know….maybe? Dicey.
First….The winds were from the East giving me the shortest angle on the field.  I had to thread the needle between several obstacles and…  if the Lift EZ decided not to live up to its name, I would be apologizing to the rancher for scaring his cows.   In my favor …. there was a healthy 8 mph to help me climb.  So… I kited a bit.  The air was only slightly twitchy and most of it was caused by soft edge rotor from upwind trees.   I decided to set-up the wing in a chevron with the center tucked in. 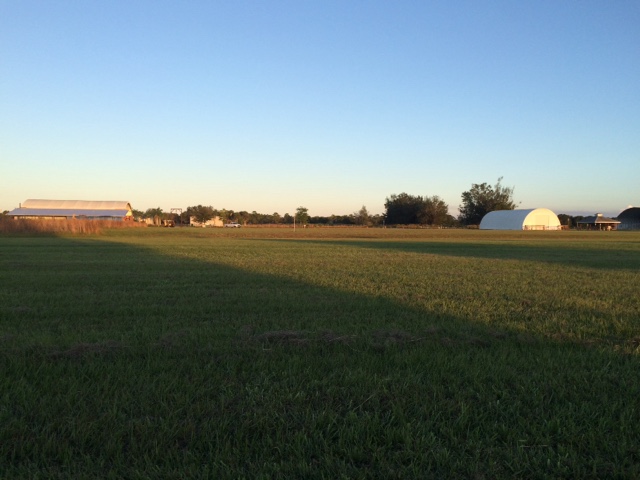 It inflated beautifully and I only needed to taxi for a short time before committing to launch.  The climb out was acceptable.  It was one of those times I missed the old simonini trike buggy but the Falcon did fine.  I headed upwind and tasted the air.  With the trim still in neutral Airspeed was 16 mph with mildly bumpy air.  The first turn downwind was sluggish.  Subsequent turns I used more brake pressure and found it better.  I suspect that had I let trim out I would have been much more comfortable.
The real problem was that I just wasn’t feeling good about the flight.  There were too many little things less than perfect.  I was pissed not to have my camera available and was trying to use my iPhone to shoot the sunset.  Try as I might, I couldn’t settle down and go hands free.  An angel looking over my shoulder would have thought that I was spastic seeing the convoluted way I was trying to hold the phone and shoot with one hand.  The sunset was stunning …. The pictures were not.
Then,  I noticed an unusual amount of play with the nosewheel.  I could feel the caster moving way too much in the mounting plate and wondered if the whole thing would fall off when I touched down.  I couldn’t see where the problem was from my perspective but it was, “hillbilly sloppy”.  It wouldnt have been a good idea to land after  sunset, when my nosewheel was acting funny.  The winds were good for a slow landing, right now.  But, after the sun sets, they have a tendency to decrease, meaning that my landing speed would be faster.
Time to land.
After an uneventful landing, I inspected the wheel and found that the caster bearings were gone.  Without the 3/8 balls filling the caster plate there was a huge amount of play with the whole wheel assembly.  It was ugly but I can probably fly it that way forever. 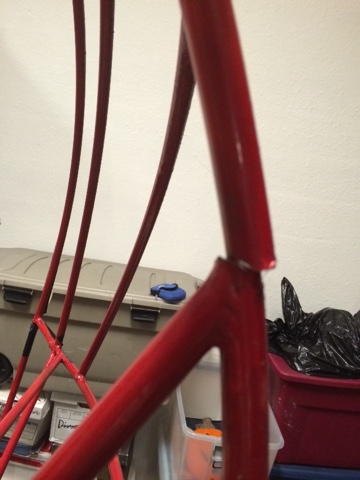 When I got home and did a more comprehensive post flight inspection, I discovered that a weld had broken in the center of the cage.  It happened after my preflight and I’d like to think that the vibration from the broken weld played a part in my unease.  Probably not.  Either way,  it wasn’t structural and not a showstopper in itself.
So…. I cheated Death yet again and flew like a bird.   Gawd love this sport. 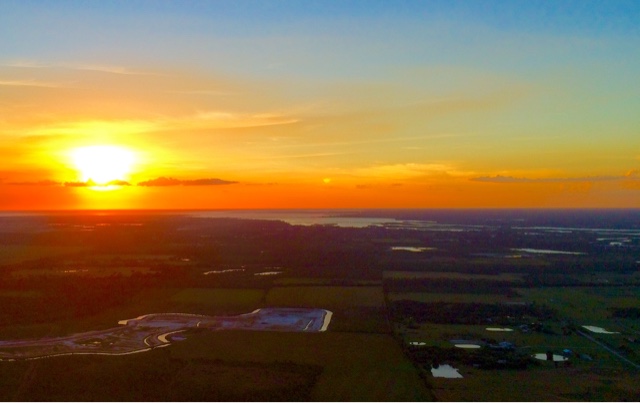 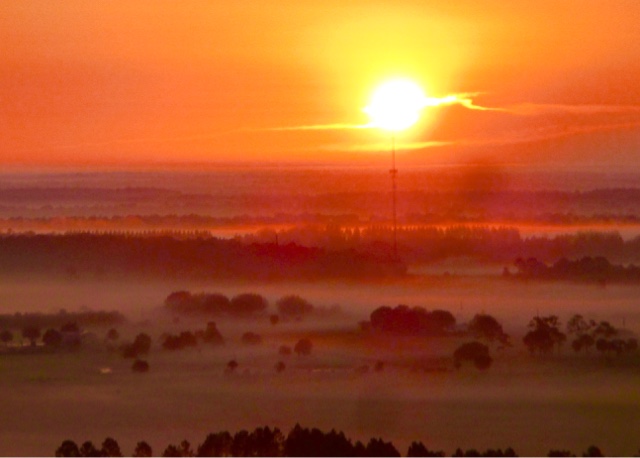 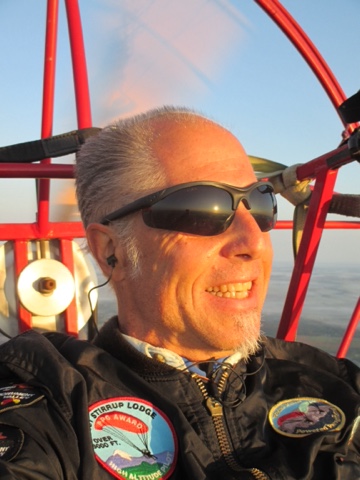 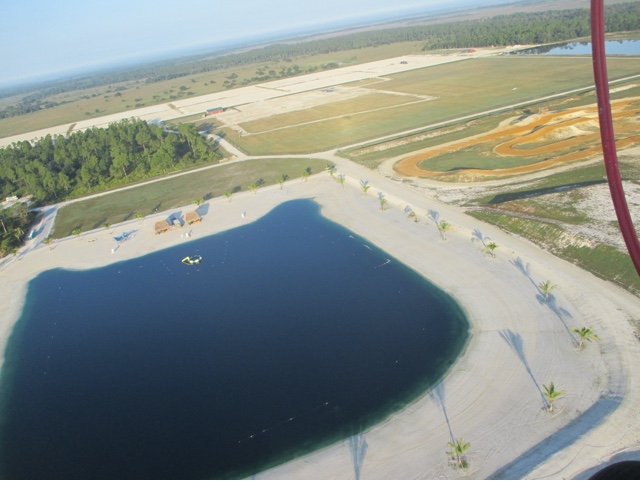