Saturday we were blown out by 40mph+ winds. Sunday was fine.
John Sieb and I raced in A fleet and placed 3rd 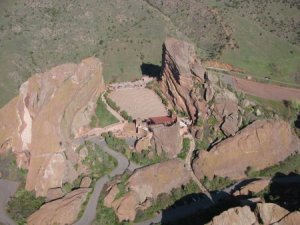 It was a beautiful morning
…Sunny 40 degrees…3 to 4 mph out of the West.

Marek … Mike Bennett … and myself. Mike and I launched after Marek and flew to the Red Rock Ampitheater. I stayed high and got bumped around pretty good, Mike stayed low and found nice smooth air. We made the day for a bunch of scouts that were camping at Bear Creek. I did some hard banking turns at 150 feet for them and I think they would have followed me all the way to Red Rocks if they could have.

Mike Bennett got some good photos and video. This was the first time he flew to the Ampitheater and his discription of the flight is wonderful.

Saturday at Simms…. Wing in a chevron was the wrong choice for layout in these light shifting winds. It came up very slowly. Forty minutes per flight. Marek flew earlier and stayed just long enough to see me get up.

Sunday at Vance Brand. I was going to meet Marek and Robert but they no showed. There was a message on my cell but I didn’t retrieve it until I was already at the field. Oh Well… I was there and they were not… So I flew.

This morning I used the motor to build a wall …. with the lines tight… the wing came up smartly. 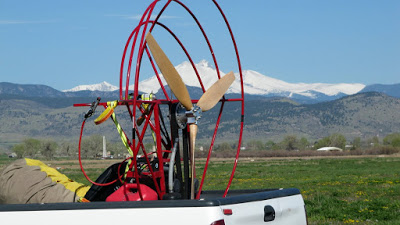 The first stick of swoop divers were either inexperienced or the nil wind made for difficult landings. I watched several do face plants after c0ming in too hot to run it out. 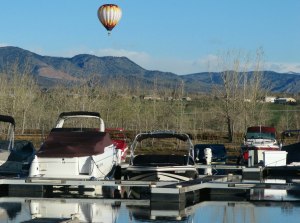