On the second morning of flying at Monument Valley in southern Utah four of us planned on flying together out to the monoliths and mesas so that professional paramotor photographer Franck Simmonet could get some photos.
“You don’t need to get close to the mesas” he said, “just stay close to me so that you are big in the frame”.
We launched into almost no wind. It could have been because we were in the wind shadow of the huge mesa beside the LZ. Whatever it was, as I flew out to the mountainous monuments, I was doomed to misjudge the winds.
The day before I had flown out to the large horse-shoe shaped area of monoliths and felt a few mild bumps when I was right in the middle and below the top of the mesas, some of which reach almost 1000 ft. Just about everyone was flying fairly close to the towering structures– but the wind was mild then.
Apparently, this day, the winds were much stronger AND I had completely misjudged the wind direction. I always stay away and above of the leeward side of any large obstruction but, as I slowly descended towards the largest mesa, I mistakenly thought I was on the windward side.
That’s when I heard Franck over the radio, “Go heighter, go heighter!” (Yes, I know it’s “higher” but he was saying “heighter”). By the time he radioed that warning I realized that I was NOT climbing very fast– in fact, I think I was sinking at full throttle.
Then, maybe 20 or 30 seconds later I felt my wing start to vibrate. This is not a very happy wing, I’m thinking. I can feel that I’m loosing brake pressure on the right side (the monolith was to my left several hundred feet). Franck and Matt are a few hundred feet above and behind me. My wing was deforming in such odd and obvious ways that it prompted Matt Witchlinski to radio his concern, “Paul, are you in some bad air ! ?”
I didn’t even try to answer. SOMETHING is going to happen soon, I thought. He had barely finished his sentence when my wing was smacked out of the air.
Now, I often play around with my wing and induce asymmetric collapses but the wing is STILL flying. This was nothing like that. My wing was batted down and folded up and I was falling instantly. It happened so fast all I had time to do was let off of the throttle and hope I didn’t fall into the wing.
The wing recovered with a few violent jerks as I checked the surge. I later learned that after seeing my predicament Franck and Matt instantly turned around to avoid the same fate– they didn’t get to see what happened next.
I’m pretty sure that Matt radioed back about ten seconds later to ask if I was alright. I didn’t answer. I was too busy concentrating and trying to control a wing that was dancing around and vibrating like I was on a drum. You know that feeling you get when you’ve vomited and you can feel it coming on again… I was waiting for it but nothing could have prepared me for the violent collapse that came next.
My wing was hit in the center and thrown back behind me and to the side. For a second I was laying back looking up at the sky. Then the balled up wing swung over to the other side and I was sideways. I dropped down and the wing swung me to the other side and on my back again. Then, next thing I know, it’s in front of me, below the horizon and smooshed up into a ball I could probably fit into my stuff sack. Well at least I can see the wing now. I drop under it again as I tense my arms in a braking position. The wing re-inflates with some rocking and surges, but thankfully, I’m flying again.
I look down and see that I still have several hundred feet of altitude. If I get hit again I might have to throw my reserve. I don’t want to do that while caught in a rotor with only jagged rocks and a cliff face below.
I don’t know if I can take another thrashing like that, I thought. I was lucky that I didn’t fall through the lines or get a major cravat… and I’m still being rocked.
I could feel that I was caught in the huge rotor- it was like a vortex. I couldn’t climb and I couldn’t get away from the monolith. The other guys had got away, maybe they can look back and see some way out. I pressed the radio button on my helmet,” I can’t get out! I’m stuck in the rotor! What should I do ?”
“Climb out”, they said.
“I can’t, it’s pushing me down!”
For a second, I considered going low but then decided that if I had another collapse like the last one that I wouldn’t recover in time. I thought about heading TOWARDS the mesa but decided that although it might get me under the down rotor, it might also suck me up and put me through the wringer again.
So I just kept at full throttle, heading away from the mesa, hands clenched on the brakes trying to keep the wing as stable as possible with every twitch and twist.
Finally, after what must have been 15 minutes, I felt the air smooth out and I started to climb again.
I headed straight back to the airport.
I had had my excitement for the day.

Paul is an accomplished pilot and the creator of the famous PPG for Morons Videos see more at:
http://ppgformorons.com/

My pronghorns were waiting for me and even though I throttled way down they were running hard.  We made a few turns together before I headed over to the gun range to see what was up. 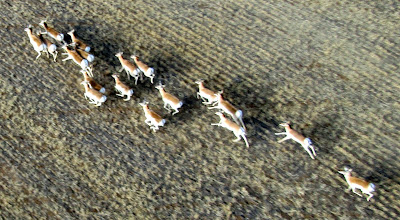 //www.youtube.com/get_player
Its a race to the fence!