Skip to content
Dawn and I arrived at Titan at 6:30PM. The winds were blowing 5 to 8 from the NNW and seems to be coming down. I was disappointed that the FRS was not working, I had allowed the battery to run down . It was certainly not a show stopper but I would have liked to have communication with Dawn so that she could be in on the action. While we were fussing with the radios I watched the winds that were cycling every few minutes 150 degrees from NNW to WSW. There were clearly high winds aloft, but down low it looked fine.  No puffs… just a smooth shifting in direction.

When I kited the PP 250 it came up clean and stable so I built a wall and set-up for launch.  The take off was normal, but as soon as I was in the air, I realized that it was going  to be bumpy.  Almost immediately the wing was swung hard to the left and I was in a huge pocket of lift.  I climbed out over the neighborhood and found the air was now moving from the southwest… 180 degrees away from where it was on the surface.  When I got over the field east of the LZ the air smoothed out but the winds were still strong.  I continued around and was soon  back into the bumps over launch area.  This time I turned to the left and found myself in some incredible sink.  I was at full power and descending at over 100 feet / minute.  South of the horse ranch I hit the lift and was climbing 300ft/min at idle.  Now I was too high to set up a landing without hard maneuvers, so I decided to turn east and make a slow descending circle but the wind picked up and I found myself parked just south of the LZ.  At this point there must have been a hard wind shift because the wing folded on the left side.  It was at least a 1/3 collapse but it popped right out and I was still pointing toward my selected landing spot.  My decent was vertical and fast, I flared at the last second and touched down.  It wasn’t a hard landing but the wing pulled back and to the left, rolling me to the side and dragging the trike a few feet, which bent the foot peg that was damaged at Bubba’s last year.  On the ground I looked over the trike and found no other damage.  Dawn saw the collapse but did not see the landing or roll over because I was out of sight on the other side of the Rush Building. …. That was a good thing.

Looking back … Perhaps this could have been avoided … A test balloon might have shown the twitchy air.  I knew there was high wind aloft by the blown out edges on the clouds and… I should have been alerted when I saw the dramatic wind shifts.  BUT … It looked so good…. the next time I’m faced with similar weather signals I will try to be more patient and if the wind is shifting wait  to see if it is a pattern.

It was a short hairy ride … the good thing was … I didn’t freak out and kept flying the aircraft until I was able to get down without real damage to man or machine.

The Kangook is everything that the Falcon is not.
﻿
﻿ Kangook is imported and sold by Eric Dufour of Paratour in Christmas Florida … http://www.paratour.com
From the minute we took it out of the shed I knew I was going to like this paramotor.  It is extremely light and so well balanced that pulling it around by the front wheel is effortless.  The frame and cage are the standard ﻿﻿﻿ Kangook that I saw at the Salton Sea.  There are three identical cage pieces making it easy to assemble.  The footlaunch unit has multiple hangpoints but this one was configured with solid bars similar to the “Power Loops” that Chad Bastian uses on the trike buggy.  Because Elisabeth’s machine is dedicated to the trike it has a bucket seat with a simple 3 point seat belt.  There is a foot activated brake on the nose wheel that allows the pilot to get situated and even run up the motor a bit before starting to roll.  Fiberglass rods provide suspension and the trike’s frame geometry insures rigidity. 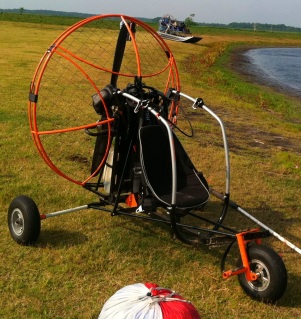 The Polini motor is brand new to paramotoring but the company has been making motors for Vespa and others since the 40s.  They are reputed to be very reliable scooter motors and if they do as well in the PPG world… a new standard will be set.  Watch out Simonini !  The first thing I noticed was how easy it was to start.  I was able to sit down, reach over my shoulder and pull the starter cord very easily.  A new “Flash” starter is being introduced that will make it 75% easier.  This… I  have to see.   The second thing that caught my attention was how it sounded, it was more like a sewing machine than a two stroke, you couldn’t make a cell calls but it was much quieter than expected with little vibration.  The RPM is higher than other machines I’ve flown but  it was …oh so smooth.  According to Polini the 115 cc Thor 100 provides 140lbs of thrust with a 51 inch prop, I;m not sure what I was flying, but it would have been plenty at my home field of 5800 ft/ agl. The Walbro carb on my old snap 100 was problematic but this was sweet and the powerband was smooth from top to bottom.  I’m used to a 4 stroke generator motor where you have to anticipate every move, with the POLINI I can envision flying Glamis at six inches.  Nap of the earth at 25 mph!  The centrifugal clutch was a nice touch and a  great safety feature.  I can see myself using it foot launch when there is a breeze and using trike the rest of the time.
Footlaunch is KING !﻿
Specs.
Manual Start Electric Start

I love my 4 stroke…
but the Polini
had me Jones-ing for the good ol days!
Maybe some day…
when I have a man cave again…
I’ll give up my “Sky Harley”
and buy one of these
sweet little spaghetti burners.
Dawn and I got up at 4:45 and amazingly were on the road by 5:10. It is a 50 minute drive from the Orlando World Center to Christmas Florida where Eric Dufour and Elisabeth Guerin have established Paramotor City East and Paratour. I was concerned that there would be no flying due to the ground fog, but when we arrived everybody was confident that it would burn off before they arrived at the field. Eric was training two new pilots and retraining an instructor who had started his career with Dell but seen the light.

Flight #482 &; #483 was at the training field with Eric Dufour and his students. Elisabeth was very generous and allowed me to fly her new Kangook trike with polini motor. Eric gave me a quick briefing on the machine. … How it started and to be aware of the left hand torque which, by the way was very mild and not really an issue. The wind was almost non existent but I would have to launch from a position that faced some tall pines. Not something I would be able to do with the Falcon but Eric didn’t make a big deal out of it so I took it on faith.
Then… Eric was gone to get his class together and I was alone on the foggy field. I taxied the Kangook at speed to get a feel for how it accelerated and around the corner to see what my options were for turning to gain altitude, just in case I couldn’t clear the pine trees at the get go. Ten minutes after Eric had pulled out,  I was set-up and ready to launch.  I waited another five, soaking in the quiet and thanking the gods.  Life is good.

The Eden III came up clean and I was in the air very quickly. Climbing at 350ft/min I was able to clear the trees with ease and found the highway without problems. The terrain was thick pines all the way to the wetlands where Eric was training so I climbed to 1300 feet to give me lots of room in case of a motor out and then I headed East looking for the gang.
The sky was a beautiful pale orange softened by ground mist. Small lakes were scattered in the pines, off to the east I could see where the trees abruptly stopped and the wetlands began. Ten minutes into the flight I saw a mowed field 300 yards off the highway and a wing laid out ready for launch. In the top corner of the field I could just barely make out the word PARATOUR cut into the grass.

From high, I watched Eric coach one of the new guys into the air. It was a picture perfect launch and when he got to altitude I headed in his direction to ” go play”. Passing at 200 yards I swung behind and started to descend to the field. At the field Eric was gesturing strongly for me to move out of the area. The pilot was doing his first flight and he didn’t want me anywhere near his rookie. After 20 minutes I came in for a nice soft landing. Dawn and I chatted a bit and Eric explained where he was going to be working the new guys so that I wouldn’t be a concern. Then I reset and launched again.

After my second flight, Dawn and I watched Eric train his students and later he put on a motor and treated  us to a few minutes of the Dufour Magic…Foot Drags… wing overs … etc …  the master of fine wing control.  It was….a
Great day …
Thanks to Eric and Elisabeth of Paratour for making it happen.

It was blowing
8 to 10 knots SE and gusty when I got to the field.  Yesterday it was six layers cold at the lake, tonight it was 67 degrees…. You have got to love spring in colorado.
I unloaded and was sitting on the tailgate when John Sieb showed up.  We chatted for 20 minutes when John decided to go for it.   Beautiful high wind reverse!  10 minutes later it was cycling lower and I set up.  During a lull I launched.  The wing came up and stabilized overhead but the buggy wasn’t rolling.  I did a little shrug and got moving.  The climb was weak just like last time at snowflake.  RPMs are good so I’m thinking it had to do with the throttle being restricted from opening all the way.  It might be as simple as the velcro is interfering with the toggle and I’m not able to squeeze the throttle lever all the way.

﻿
The are was pretty turbulent below 300 feet but above it was just blowing.  I didn’t travel very far from the patch and when I did get north of Titan I was barely it was a chore to get back. The landing was very steep and when I touched down there was no roll except to roll back a few feet while I deflated the wing.
John came crabbing back from the East and also had a no step landing.
Good flights … no damage to men or equipment.
Now it’s time to get ready to fly with Eric and the Orlando boys.