Skip to content
I was a little nervous laying out the wing but the motor started like a champ and the Thumper took off just fine. The brake pressure required was alot more than I was used to. and I didn’t like the way the buggy was pitching. Chad didn’t think there was anything to worry about but I’m not liking it. After landing Jerry Frost made it a point to tell me that I needed to raise the hang points because I was wheelbarrowing during launch.
The second flight was very short. The machine was so quiet that I forgot to put in plugs and put on the helmet. Right after lift off The hat went through the prop and when I heard the “wack” I was thinking broken prop or worse. I got off the throttle quick and came out of the dive with just barely enough time to flare. I bounced floated and landed. I write that one off to unfamiliar equipment and move on.
The third flight was pretty good. I stayed up maybe 30 minutes and experimented a bit with the wing. It’s really hard to pull. There is plenty of power at sea level . I’ll know more when I get a chance to fly in Colorado.
//www.youtube.com/get_player
hLast flight of the Simo
It was a normal launch in every way…Until… I looked up to check the lines and sure enough there was a great big twig twisted into the A lines. It was deforming the leading edge near the center of the wing and I decided right then to get down so I flew over the field and the scrub that borders the north edge and set down in the first sandy patch available. Up to this point it was a non event, I had plenty of clear space ahead and the surface was soft but not too soft… so I set up for another launch. The wing inflated and the taxi was going fine until the sand got allot softer and the buggy sunk in to the mixture of sand and shells. Instead of killing the engine and aborting I added power and a split second later heard a loud crack.
Some lines were cut, the prop was broken, both of the top pieces of the cage were bent and the frame broke at the top motor mount. It’s hard to believe that a line in the hub could do so much damage.
I was hugely bummed to say the least. Grounded and there was still 6 days of flying ahead!
Big Day lots of firsts…

Most Flights in one day. It should probably be 256.5 because I did a touch and go that was so long I taxied the full lenght of the field. 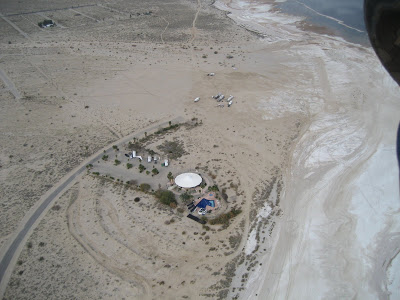 First time to fly a 4 stroke. I took up Bens machine with the eden 28.

The thumper flight was marred when I rigged the brake line thru the hangpoint rings and had a friction lock. Landed dead stick at the rocky end of the field. I had to take a wrap on the Brake line above the ring.

Tonight there was a prop burning and outdoor movies. 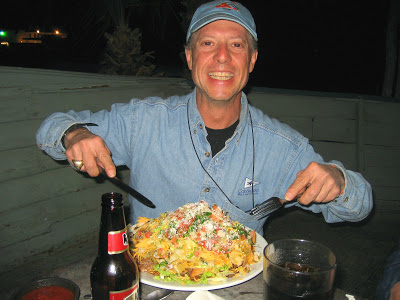 I had dinner with Ben at the Mexican Resturant…Huge Special plate. 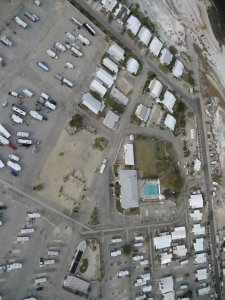 Lots of airtimeSalton Sea! I started at 9am. 5 good launches and 5 good landings. Lots of the low and slow. Flying with the birds. Great day of flying!

Hooked up with Robert K, Ben M, Johnny F. and Terry L at the new resturant on the Hwy. Talking 4 stroke…props….wings.
Bad day for the Thumpers …both Ben and Terry took damage from getting lines in the prop.

2 flights in the morning then packing for Salton Sea

One at the sea 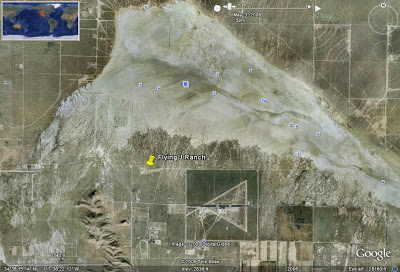 After visiting with Saundra Painter in Santa Barbara I drove out to El Mirage and waited for the wind to die. I’m camping at a small private airstrip that caters to ultra light Delta Trikes. They have a Quonset hut hanger with 6 trikes and several shipping containers where guys like Chad are storing their equipment. To the south east there is another facility where they are assembling and test flying the Predator unmanned vehicles for the military. All afternoon while I set up my camp there was a predator circling over the field. Its a very strange looking plane with the bulbous nose and lots of junk hanging down. The landing gear are on long sticks and the twin rudders are mounted below the fuselage. At the right angle when you cannot see the wings it looks like an insect…more like a grasshopper that a plane flying at 800 feet. 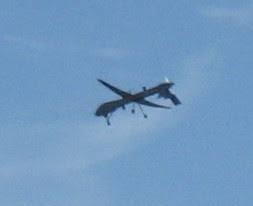 About 40 minutes before sundown the wind dropped and I went up for a test flight. Beautiful smooth air ! While I had the chance I practiced spot landings and several times I was able to touch down within a few feet of my wing bag.
I climbed to 100o feet and chased the sun. The dry lake is partly full but even so there was only a couple of inches of water. It’s less than a mile from the airstrip and a wonderful place to practice the low and slow, there are miles in all directions without a post or obstruction of any kind. 8/10 of a mile to the south west is a small uprising (probably 1000 elevation climb)called Grey Mountain. I climbed until I was even with the top and watched the sun set. When the shadows disappeared I cut power and descended to the LZ.

It got cold quickly and rather than try to heat up a can of soup I drove to the edge of the closest town and had a burger. Back at the tent I listened to the IPod and spent a very cold night in the desert.
I
#236 & #237

My brother in law picked me up at the Tucson airport and I was off to the coast! The wind was forecast to blow in Maracopa and Glamis so I drove straight through to the Salton Sea. Depending on if I got a call back from Michael Purdy I was planning to fly either San Diego or the Sea. The only place to stay near Salton City was a very rundown fishing camp full of illegals…I backed the truck up to the door and hoped for the best. The next morning I was at the new site as the sun was coming up ready to fly. There were already 5 or 6 vehicles in the dry camping area, looks like I’m not the only one want to get there early. I met Jim who is Michael Purdy’s brother in law.

I got in a couple of flights to test the air. Radical changes in air temp with some minor bumps. The field isn’t very well groomed with lots of twigs and medium to large rocks. It’s a little early to start criticising but I have the feeling that this site is not going to be the paradise that the “Dome Site” was. The coast to the right of the LZ is clear for about half a mile and to the left there are some abandoned buildings and wires to watch for.

Today I spoke with Terry L about the CT Trike. I’ve have been follow the progress of the 4 stroke trike buggy for several months and last week Ben Miller test flew it in Albuquerque. Now that it looks like it is going to fly at altitude I’m looking forward to seeing it at the Salton Sea. Who knows…I might own a 4 stroke soon!

Three Flights …Two blown..Forgot to disengage the choke.
Strike one… I was feeling pretty good about things. The motor was starting on the first pull and I was so busy patting myself on the back that I missed the fact that I was having a hard time getting up to 6000 RPM and I also missed the way it was stuttering when I backed off the throttle. It speaks well for the bing that I could have the choke on and fly so well.
Two of the five attempted launches were aborted the first because the wing overshot and even though I was using brake and rolling forward …it would not load up. Maybe if I shortened the brake lines a bit I would have a little better control during the launch.
** NEXT FLIGHT **SEE HOW MUCH SLACK THERE IS IN THE BRAKES AT FULL TRIM AND TRIMMERS OUT. See how much pull will bring the brake lines to the point of moving the trailing edge.
The next abort was because the wing came up crooked after I had aborted stopped and brought the down it tried to pull me over in a slow roll. **NEXT TIME***TAKE A WRAP ON ONE BRAKE LINE AND HAUL IT IN.
The good launches were a mixed bag, during the highest wind I was pleased that I was able to take my time and kite the wing and taxi for awhile before I committed to the launch. The other two were not noteworthy.
All of the landings were the same, I killed the motor and flared late to bleed off speed. Nice soft touchdowns every time. It’s nice to know that I’m finally getting a little of that muscle memory that Brian Smith used to talk about. 🙂
The wheeley casters work great, but I’m going to have to practice with the trimmers at different positions because at full out the wing comes up too fast to give the buggy time to start tipping.