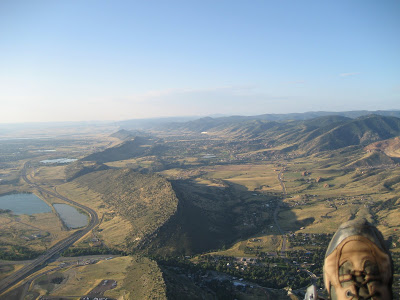 I awoke at 3:50 this morning when the cell phone’s low battery tone woke my bride. After 40 minutes of trying to go back to sleep I slipped into the closet and pulled on the thermals. It reminded me of the first couple of years when I routinely was out of the house before dawn. At 5:00am it was just beginning to get light and there was a fresh breeze from the SW. I took my time looking for the smoothest place to launch and was ready to go at 5:30. The wind was light and I launched after the longest run out ever. It was a little dicey because the climb was very slow and I ended up threading the needle between the trees on the south side of the field. The air was mixing and in some spots down right ratty. I climbed to 6000 and it was no better descending to 200 ft AGL it got very active with the wing yawing and generally making the front wheel describe circles. I set it down just as Marek was pulling into the LZ. I would have done a touch and go but this darn motor is so slow to respond and it felt like sinking air so i satisfied myself by greasing in by the truck

We chatted and I was glad to hear that his Chrysler Dealership was not on the hit list of thirteen to lose their franchise in Colorado. After 20 minutes or so it seemed to be mellowing and I set up for a second shot. Marek saved me the hassle of laying the ramps under the tires and the take off was much better. It was still a long run out but the climb was better. I stayed up 45 minutes and ventured away from the field because the air was much better. This was the first time I have hooked up the foot steering and it is absolutely easier than with the rig I had on the Simonini. I’m going to have to practice maneuvers because I cannot tell it I’m not using enough input or this wing is just plain doggy. I do notice that it seems to be a little more cranky when I’m turning to the left.

I love the way this machine is so problem free but I’m not sure I’m going to be able to adjust to the slow run up to power and general lack of punch.

The last several flights I’ve noticed that the motor is running between 3500 and 3600 but not coming up to 3700. At the house and before take off it had no trouble getting up there so I’m thinking it’s time to put in the high altitude jets to see if I boost the power. It might also help with gas consumption.

After packing up I rushed out to Chatfield where Spencer and I put in the Paradiso. The impeller seems to have frozen. Stay tuned for the damages.