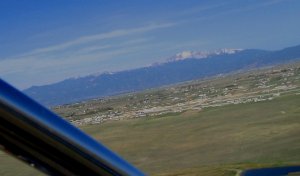 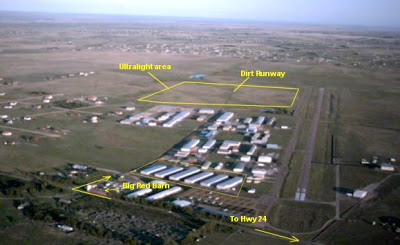 Up at 4:30 am and on the road by 4:50. It was a beautiful morning without a cloud in the sky. The night winds were blowing at 15 kts but I was confident that it would come down with the sunrise and I was right. I had no trouble finding Meadow Lake Airpark which is located 20 minutes east of Colorado Springs. The LZ is a nice grass field east of the runways. Matt was laying out his wing as I bumped across the field and while we caught up I saw Kevin crawling out of the bed of his pick-up where he had spent the night. While we were setting up Jerry Kerr arrived and everybody took off. 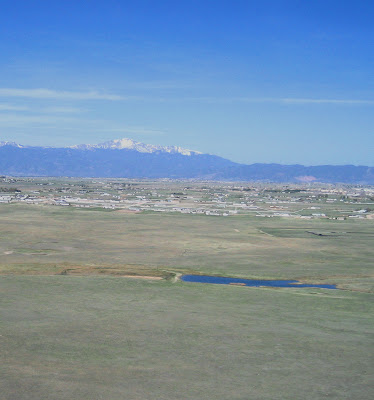 I had a hard time getting off. The wing was coming up very fast and falling to one side or the other, once it overshot and tucked. I tried using the ramps but it didn’t seem to make any difference. Finally after 3 aborted launches Jerry gave me a little pull and I had enough forward speed to keep the wing inflated. I think the problem wasn’t so much the altitude (6800msl) as it was that the wing was in a wall and the lines were tight before I started to power up. If I had layed out the wing in a V so that I could start building some momentum before the wing started to inflate it probably would have worked out better. The climb out was slow but smooth. I flew south to the pond and then turned East around the housing development and into the huge open area where there are no altitude restrictions. 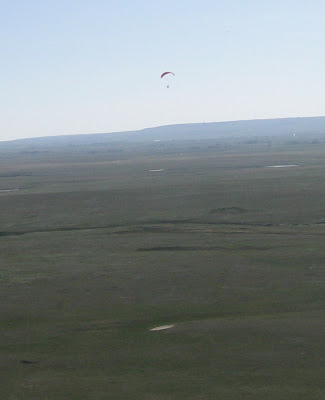 I stayed at 800 to 1000 feet while Alex played below. Watching him I was very aware that I missed the power to weight that I had with the Simonini. The hardest bank I could achieve was pitiful compared to compared to a good two stroke. Maybe a different wing will help but I don’t think so. After 20 minutes the whole gang was in the same area. I danced with Jerry on his trike and eventually followed him back to the LZ to land.

The second flight was short because it was starting to get thermal. It came on fairly quickly it was smooth at 500 feet and when I dropped to 300 there was lots of sink and lift. It wasn’t abrupt and shocking but more like riding a river with gentle transitions from lift to sink and back to lift. I had to do a couple of approaches because I got lifted causing me to overshoot.

Last night I spoke with Marek…Seems that he got his throttle cable caught (I’m not sure on what) during take off and threw himself in a spiral. I think the throttle hand was pulling massive brake. Anyway…He is ok except for a sore leg…but his rig is reduced to motor having destroyed the cage and frame. I told him that John Black has some Walker Jet stuff that cost him nothing so hopefully he will be able to get back in the air soon.