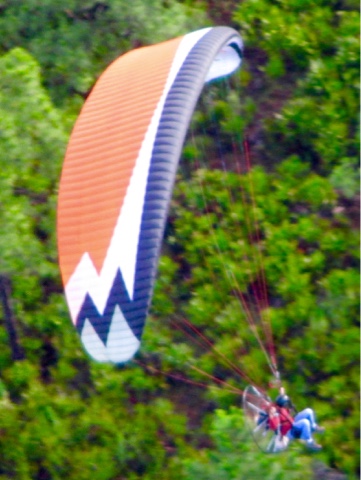 The take offs were long and low for both Mike and I.  After getting up a good head of steam I felt confident that a small amt of brake would launch me.  I was wrong.  A little brake got me off the ground but then I was stuck in that awkward situation where I couldn’t gain any altitude because of the brakes and if I let off brake I would start coming back down.  So there I was 6 inches off the surface waiting for the rig to pick up enough speed so that I could get the flock out.  It really wasn’t a big deal but it seemed to take forever before the rig started climbing.  I slowly let off the brakes and eventually it happened.  I can see why Dan D. had some issues after leaving Porto Valarta and going to 5500 ft.  I’m not sure this would be the best wing for Monument Valley and certainly not for launching out of a bumpy horse meadow.  It requires speed for launch.

The first flight was short.  I was concerned about the weather and after running into some particularly nasty air I returned to the LZ and landed.  I can’t explain the bad air that spooked me.  It wasn’t short like going through my prop wash but there wasn’t anything close that I could see to cause the instability.  I did see it depart when it passed over a pond.
I waited a few minutes and relaunched.  Same thing, long slow climb out but the air was good and I enjoyed the moment.
The big news of the day was that I’ve removed th A Assists and launched without them.  The Lift doesn’t require a lot of pressure and the shoulder feels fine. 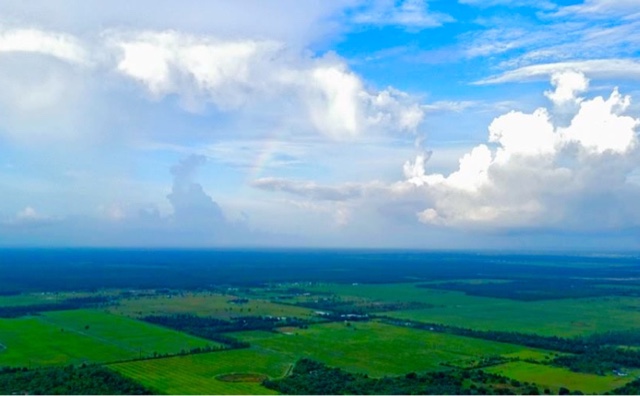 Mike Lange took this shot with the faint rainbow.  The air was good dispite the boomers to the South West.