The morning flight was a combination of screw ups.
A combination of events made for a a crosswind launch.  First I made the mistake of leaving the key in the on position and had to jump start the Falcon.  When I got it started I noticed that the wind had picked up and was coming from the south which was exactly the wrong way for me to get a decent run out.  I didn’t want to shut down the motor and start all over with the jumping the truck so I looked things over and decided it was probably light enough to go for it.   Inflating the wing 90 degrees off the wind should have been challenge enough, what I didn’t notice was that in the rush to get unhooked from the truck the port side riser had slipped leaving the cam below the hang point loop. During the inflation this mistake worked in my favour because the wing started turning into the wind right away with very little brake input  I was a little surprised that the strange crosswind launch was going so smooth and didn’t realize the reason why until I was up.  With the port riser riding low the wing naturally turned to the left The safety strap had been pulled into the hang point loop and the cam was bound inside of the strap.  I stayed on the throttle and climbed to 250 ft and used both hands to pull on the strap.  When it finally pulled loose the cam was still jammed and I had to worry it until it slipped through the loop.
Once that little bit of drama was over the rest of the flight was SOP.

That evening I met up with Ion who took me up for a flight in the Easy Long.  There were big thunder heads with the classic anvil shape to the east and west.  We flew out to Lake Granby slaloming between the clouds. 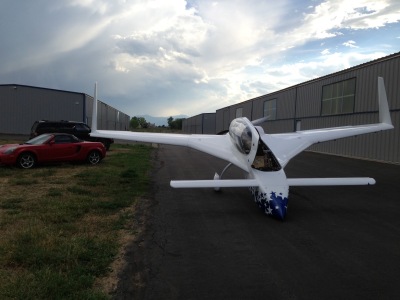 It was a great flight!  We topped of at 18,000 feet and were in and around the clouds.  Returning to the front range Ion flew level with the hogbacks and pointed out old Indian animal traps.  Places where they would drive the animals to a dead end where they would be taken by the hunters.  These were developed over the thousands of years prior to the “Indian Horse Renaissance”, when they had to do all of their hunting by foot.

//player.vimeo.com/video/72941075
Flying the EZ LONG with Ion from Joe Onofrio on Vimeo.