Skip to content
#525 and #526
Daylight Savings changed to winter mode weekend  so….  I was a little off when planning what time to leave the house.  I could have tried the Saint Mary’s site, its only a mile away, but I wanted a long runway with a smooth surface.  The rows of bumpy ruts and high tension wires at Saint Mary’s just didn’t suit me tonight… I needed a nice easy LZ.  Vance Brand was looking good, I arrived at 4:00 pm and wasted no time putting up the wind sock and and unloading the Falcon.  It was 40 degrees, not quite cold enough to warrant the Electric G gloves but I wanted to try them out so that this winter, when it really got cold,  I would be familiar with all the hook ins and where they went..  By the time I was ready to launch it was 30 minutes till sundown.
The wind was light from the south, not unusual for this time of day but it was the first time I’d launched to the south at Vance Brand.  I layed the wing on my lap and powered to the north end of the LZ about 50 feet from the General Aviation runway.  There was plenty of room but with the Eden III lots of runway is a good thing.  The G-gloves were bulky but manageable when I was positioning my hands to hold the the A mallions for inflation.  The wing came up quickly … I added some brake to allow time for the trike to catch up and started my run out.  The takeoff was sluggish and I found myself turning to the right.  Even at full power I wasn’t gaining altitude and a couple of times I considered. aborting but I had turned 180 degrees and was flying toward the runway.
The correct thing would have been to go with the turn but I decided to fight it and kept adding left brake until I was able to fly straight.  Eventually I was pointed at the west end of the runway and then turning back toward the truck.  The wing was climbing but slowly.  I looked and knew there was something wrong that was causing the turn but I didn’t catch it until I landed. 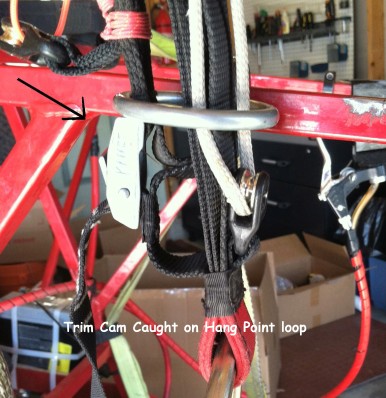 Despite being aware of keeping the trimmer cams above the hang point loops while setting up, the right side had somehow slipped down, hanging the trike from the hang point loop and the cam.  This has happened to me before and a couple of times I was able to free the cam but for some reason perhaps the bad light and dark sunglasses I didn’t see the problem. It is not a good thing, the hang point loop isn’t designed to take a load and when the cam is caught below the steel ring it causes the risers to be off center by more than an inch.  The wing will naturally cause a turn forcing me to used brakes and lose energy to maintain a straight line.  Perhaps it happened when I was adjusting the wing or positioning the lines…. whatever the cause, I was having to use lots of left brake to fly straight and when it was time to land I was using a huge amount of brake on the left side to maintain.  It is a small wing and needs speed to fly so I was a a distinct disadvantage, being forced warp the wing into an inefficient configuration to remain aloft.  The Eden riser is different from the PowerPlay,  it is more apt to do this and so I’m going to have to make it one of the last checks before starting the motor, expecially when I fly the Eden.

The second flight was just to prove I could.
Take off was fine but the climb out was slow.  When flying the Eden I’ll have to allow for more room to gain take off speed.  The place where I had set up was adequate but there wasn’t a lot of room for error,  I found myself using brakes to get off and then I  had to stay on them to avoid dropping down.  Eventually I was stable I let up the brakes which allowed the wing to climb and the climb was good.   I circled up to 400 feet and pulled a couple of wing overs, circled over the hangers and landed.  It was all good and the landing was clean.
Two short flights…… Not much airtime… But
I got my fix and feel much better about
Life, the Universe, and Everything.