Skip to content
I got to the field a little earlier this time.  There was a very light breeze from the East (Weather Underground predicted.)  While I was unloading the rig, the wind shifted to the West and increased to 8 knots. ( THIS WAS A 180 DEGREE SHIFT)  It didn’t feel like a good time to launch so I hauled my wing out to the center of the field south of the runway and kited for a bit.  The Eden III was dancing overhead, there was plenty of lift but it kept shifting 30 degrees from left to right.   I had no trouble keeping it up  but it wasn’t a stable air mass.  It continued to build with gusts every few minutes,  the air was bouncing between 6 and 12 knots and continued to vacillate.  It was not looking good.   There was a band of clouds running along the front range (mountain wave). There were also large lenticular clouds East of the wave that that I thought might indicate high winds aloft.  Whatever it was… the sky was not settled and I wasn’t comfortable. 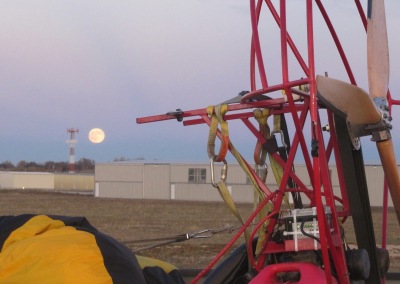 I  didn’t think I was going to launch… but hope springs eternal.  The sun was behind the cloud band and I thought there might be a chance that when it dropped below the band that there would be a favorable change.  Sure enough it did… it was still from the West but it decreased slightly and the gusts were coming down.  I had walked back to the truck and was still uncertain…. So I loaded the kiting harness and powered out to where I had left the wing, that was built into a nice wall.  If I wasn’t going to fly at least I could get some good kiting in.  Picking my way around the swoopers sandpit I drove out to the wing.  The wind was manageable but I was still concerned about gusts.  Taking extra care I hooked-in, this time making sure that the the trim cam was above the hang point loops and not likely to slip and get caught hanging the trike from the cam buckle.
The launch was clean,  I did use brakes to get a little extra lift but quickly let them go and was climbing at 200 ft/minute.  The air was unstable with pockets of lift and sink.  The wing was surging and the wind speed was increasing with every foot of altitude. At 400 feet it was 20 knots and at 600 feet it was over 30.  I was glad to have flown but it wasn’t a lot of fun. I was barely penetrating into the wind and being blown way over the hangers every time I turned downwind.  Eventually I was caught in some nasty turbulence and decided enough was enough.  Turning East I set up for final over the truck.  Decent was almost vertical and the touchdown was light as a feather.  I let the wing fly after shutting down the motor and kited from my seat for a couple of minutes.  If only the air had been as stable at altitude as it was at the surface.
Short but Satisfactory