Skip to content
Morning Flight 90 minutes.   Low and slow  in the desert North and approaching Eagle Mesa.
Dawn flew the Delta with Larry.  Nice long flight.
The most notable event of the day was late in the morning when Icarus Racers Byron Leisek and Miroslav came in on their 1000 mile journey from Montana to Las Vegas.  Byron radioed from about 20 minutes out and was hoping for some pilots to be airborne to accompany him in.  Unfortunately, most had left the field and those who were there weren’t inclined to launch.  Never the less Byron came in and gave us a short macro show before landing. Myroslav arrived about 10 minutes later.

I cannot speak highly enough about the guys who are taking this challenge.  Flying over terrain that would make recovery very difficult.  Flying around weather that would ground most of us.  Carrying the extra weight of camping gear and two stroke oil.  Id love to do some long cross country flights but I don’t think I would attempt anything quite this adventurous.

After lunch we toured the park 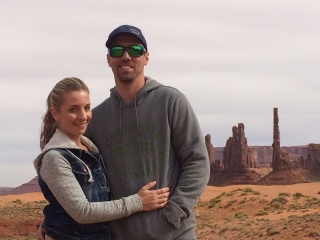