To thing spectacular to report.  Nice flight with a dead stick landing.  The kill switch was found to be inoperable during preflight.  I killed the engine at 200 feet with the key and enjoyed a quiet landing.

Two days later I drove up to Placida because I found myself awake at 5:00am and didn’t see any reason to go back to sleep.  It was dead calm at the house but there was a steady 10 mph wind at the LZ.  Since I was there before sun up I got the rig ready and waited.  About 15 minutes after sunrise the winds started to abate.  When  I got out of the truck to check conditions, I heard before I saw, a rain shower.  It was really quiet strange to hear the rain smacking into the earth but not seeing the shower.  I pulled the wing into the cab and waited, the rain only lasted a couple of minutes.  I wiped off the seat set up the wing (three times due to shifting winds) and eventually launched down the road in nill wind conditions.  It may have been calm on the surface but it was anything but at 350 feet.  Strong turbulence began at 300 and worsened the higher I got.  At 400 feet I was doing the puppet on a string thing and decended back down to 300.  It was lumpy but manageable.  If it had been just a little calmer I would have tried out the new selfie stick but no sense in that.
After 20 minutes of loitering at 300 feet I went back up to 350 to see if it had mellowed but the air was still unstable so I landed.  The repair to the kill switch was done before leaving so i field tested it by killing the motor at 50 feet and just for fun greased the landing. 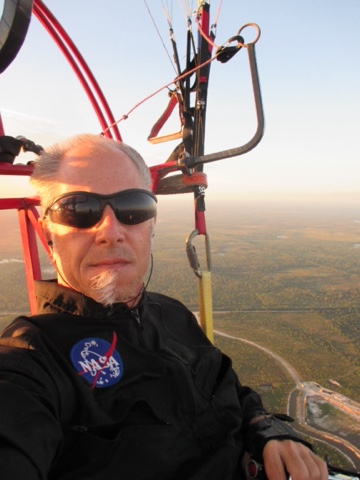 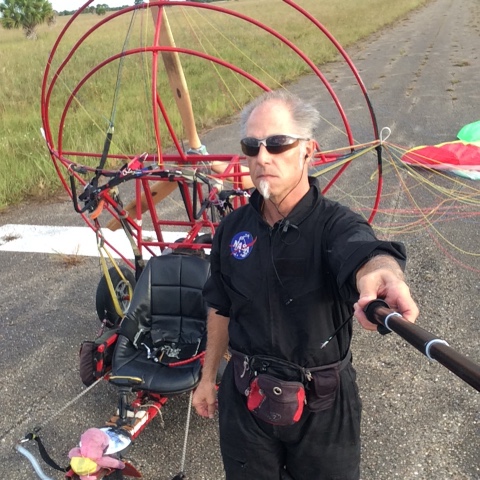