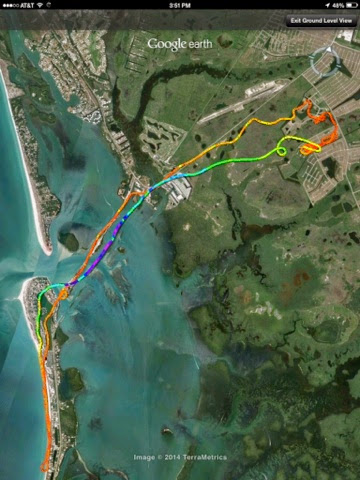 This was the best flight Florida flight ….so far.
I arrived at the LZ while it was still dark.  The skies were clear except for one cell off to the SouthWest.  Launch was fine except that there was a layer very low to the ground and I found myself flying with a tailwind almost as soon as I launched.  When I came back to land it was the same thing.  Dead calm at the surface and a 10+ mph at 30 feet.
I followed the road to the Gaspirilla Toll Way and crossed over to the island at about 1100 ft MSL.
The wind was 10 mph heading out to sea but there wasn’t any weather that looked to change anything so I flew down the beach and took in the sights.  I decided to stay at 100 ft. because the wind blowing over the island was making for rotor at the beach.  I look forward to being there when it’s blowing on shore.

On the return I spotted my first Manatee but that was the only non flying  wildlife I saw.  There is a private jet port on the other side of Gaspirilla Road.  I was temped to do a touch and go but the tall fences with concertina wire dissuaded me.  I could picture some security guys with fully automatic weapons meeting me on the tarmac.

When I was coming back to Placita I noticed the guy in the closest house taking pictures and waving.  No trouble there, thank The Lord.
Tomorrow I’m heading down to Fort Meyers to fly with those guys.