Marek does a foot drag on the swoop pond
I knew this was going to be a very sad weekend so I scheduled myself to be as busy as I could. Friday night I slept over at Chip’s. I went to bed early and got up to go to Vance Brand airport by 0600. Once again the plan was to meet up with Robert and Marek at 0700. Last time they stood me up but I doubted they would do it again. It was a beautiful morning, as I drove by Boulder there were balloons lifting off… a good sign that the weather would be favorable.
At the field … Marek, Robert, Mike Bennett, Greg and Gary were admiring Kurt Hill’s prototype PPG Trike that Robert had dubbed the “Wheelchair”. 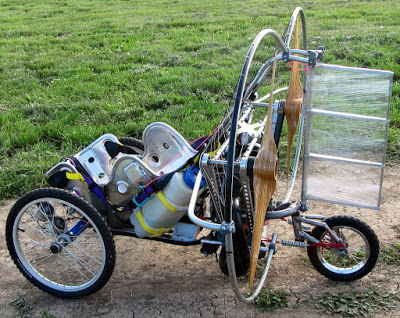 It has two small counter rotating props and is configured as a tail dragging trike with a rudder. The seat is trick, it is an aluminum bucket that wraps around the torso and goes all the way up to provide full back neck and head support. 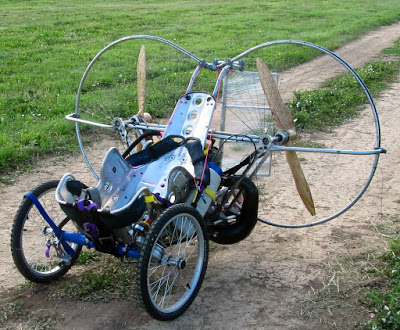 It lays way back in the same position as a low hook in free flight harness. It will be great for watching the wing but it might strain the neck while watching the road during take off. He didn’t fly because he is having trouble steering while on the ground. Seems the trike looses control and starts to spin out when it comes up to speed. It has a rudder but it is more of an air baffle for the props than a steering vane. I’m no expert but it just seems to me that the small back wheel is just too squirrley and prone to over steer. But… it looks cool and who knows maybe one day he will work the bugs out and fly it.
Vance Brand is farmland flying. It’s pretty but there are no elevation changes and the landmarks are all major x-county flights. I wasn’t in the mood to get to far away from the patch so instead I worked on take off and landing and got in (4) 30 minutes flights. The best thing about this site is the nicely groomed field. It’s as good as launching off of a golf course. There was just barely a hint of breeze and for the heck of it I did one launch and landing with the trimmers full out. It’s a great feeling to keep off the brakes and see how fast you can go and still keep the wheels on the ground. When the machine does rotate I add power and watch her climb. Terry… I neglected to charge the batter on my GPS so I cannot document the climb rate but it was stunning! Landing with the trimmers out on a smooth field is also great fun. Hands up… till the very last second and then…with a nice smooth steady flare you can float at one or two feet for a long way while the energy is bled off, swapping speed for lift.
Sometime during my last flight, Dan K. suffered a motor out just after take-off. He got up to about 15 feet and was starting a hard banking turn when the motor died. With almost no time to flare he came down in a butt landing right into a small berm. Had it been a flat surface it probably would have damages the frame and we would all have had a good laugh but the berm was bad luck. Robert Kittila. and Mike Bennett loaded him into a truck and off to the ER. At the hospital Dan learned that he had two compression fractures, surgery was not required but he will be wearing a back brace for the next couple of months. I later learned that the day before he had a motor out at 200 feet. The problem was a loose spark plug which he replace with an old plug at the bottom of somebodies tool bag. The replacement plug was even worse.
After stopping at the piano store for a couple of hours I hit the sooper market and bought the fixings for the CSYC Raft-Up I was hungry and decided on Italian sausage and thanks to Stefania … chocolate crepes. The Raft-Up was nice all the usual suspects brought way too much food. I got a good chance to check out Dana’s boat which is much better suited to go to Blue Water than my Hunter. I think it is an Island Packet if not it is very similar. He has done a great job getting it ready for adventure, it has a generator and except for some more instrumentation it looks ready to go. 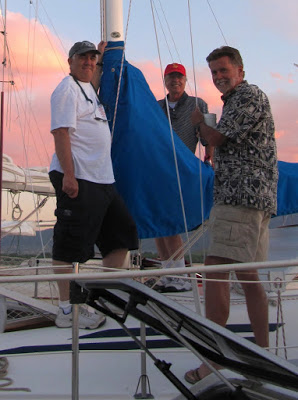 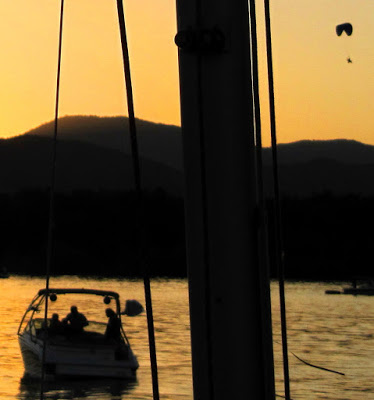 Greg provided entertainment by flying low and slow all along the shore.

I have to give him credit, 2 hours in the morning and another two that evening.
It’s the passion!
Roy Burley came out with me… planning to make it an early night but after the last boat peeled away we found ourselves below deck on the Hunter swapping stories and getting to know Dana and his companion. Good folk. Next week Roy will be racing in San Fransisco … Good Luck