3/5/10 Bill took the first watch; I relieved him at 0200 hours and stayed on until 0530 when I started seeing crossed eyed. It was the coldest night so far, I wore long johns and two pair of socks. Not much to report. Steady wind, Blowing Spray and increasing commercial traffic.
0800 hours Awake thanks to two mugs of Earl Grey. Time to wash the stink off
0930 hours It looks like it might be our last tack of the passage. After tacking for several hours in the narrows we are heading 281 degrees and it is dead nut to Key West. The channel has made a slight bend to the west and the winds have clocked a tad to the east. If we can keep up this most excellent speed of 6.5 kts. (doubtful) our time to destination is 50 hours and 30 minutes.
0945 hours A freighter is approaching from astern…big sucker…, we tacked to starboard and he crossed our bow 90 degrees off our course. It was a big green equipment ferry; I could not see what flag he was flying or any flag. We crossed his track when he was about one half mile away and his prop wash set off the shallow water alarm.
1100 hours Bill is sleeping. Seas are flat, boat speed is 3 kts wind is 5 to 7, the GPS reports that we are 100 hours out. This is the toughest sailing so far, you cannot feel the wind from inside the pilot house and when the winds are light and on the bow, it’s easy to miss a shift and find yourself in irons. Now is the only time I wish we were in a sloop.
1145 hours I’m sitting at the stern taking a little sun. The wind is down Bill has decided to burn some fuel. I can see Cuba to port. 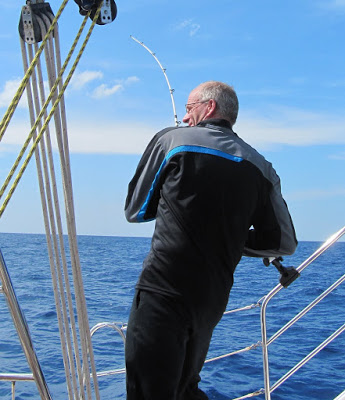 1600 hours Bill caught a Mahi Mahi ! Hell!…I didn’t even know he had a line out. BUT…I did… hear the reel start to sing as that beautiful teal colored fish took the hook and ran for life. I called out, YOU’VE GOT A FISH! Bill took the rig out of its holder and graciously offered it to me…But it was his fish and I insisted he deserved the catch. I’d like to report that he stood 6 feet of fighting dolphin on its tail. 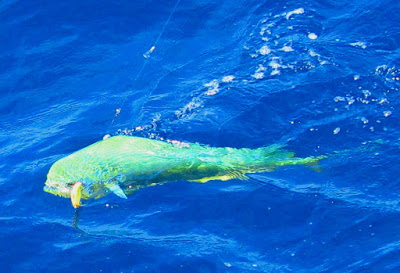 This voyage however, was no fishing charter; Bill made short work out of bringing it alongside and getting it aboard. He was a bit tender when it came down to the kill, which wasn’t helped any due to the lightweight hammer that was at hand. Three taps and we started to fillet.