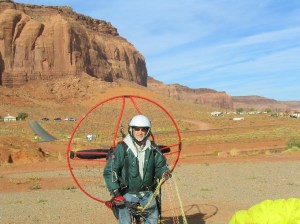 Sky King
Photo by Beery Miller
…I, Sky King of Austin, Texas, arrived home Monday evening after a great road trip to Monument Valley, which was “non-organized” by fellow pilot Joe Onofrio,the Italian piano dealer and former horse wrangler from Colorado. Thanks, Joe,for putting it together and getting permission for the rest of us to fly over such a stunning landscape.—Beery stated it in a previous post, but the view from the ground alone is worth the drive. Then to be able to fly over the famous rock formations, most of them standing 1000 feet or more from the desert floor, was truly a privilege.—Launching and landing from a corner between two rotor-causing rock formations400 feet tall or more was challenging, even for the more skilled pilots attending. I felt lucky to have been able to launch three times (I lost count ofmy attempts). But as Jeff Goin says, it’s all about risk & reward, and at Monument Valley the reward definitely justifies the risk. That’s just my opinion.—A few pilots suffered bruises and scrapes, but no one was injured seriously that I know of. I fell down fairly hard in a sticker patch Saturday afternoon after landing hot and off-balance at the end of the runway in trashy air — I should not have launched in the first place — and became pinned to the dirt under a spinning prop until John Black arrived and carefully reached in to disable my motor by jerking the spark plug wire out. Thanks again, John. Right behind him were Beery, who helped pack up and return my gear, and Nurse Sue from Albuquerque, whose hug made the crash-landing worth it — remember, risk &reward. Later that evening I tried to get another hug by telling her my leg still hurt. It didn’t work.—My starter rope failed to retract Friday morning, and pilot Mark of St. George,Utah, an actual mechanic, fixed it by rebuilding one of the paw springs that had malfunctioned. Then Saturday after my tumble in the desert, Olaf of Indiana and John Fetz, the old man in the sky, working together, fixed a broken kill-switchconnector and repaired the spark plug wire with a part from Beery. Much obliged to you guys.—Besides the activities at the flight line I learned some great poker lessons from Colorado lawman Jerry Kerr and Chabba the Hungarian. Also Sean, Beery and John Black. Captain Black — (by the way, during this fly-in I learned that Black actually was a captain on an offshore fishing boat) — won the six-manno-limit hold-em tournament Saturday night. Don’t get too excited. The winner-take-all jackpot, which at the end was a heads-up contest between Black and Chabba, totaled a net of $50.—I drove back to Austin Sunday and Monday smiling about the great memories created at Monument Valley. Next up: Galveston, Texas on Oct. 23. Beery, I’ll give you a chance to win your money back. Assuming Kim will give you permission to play. — SKY KING..