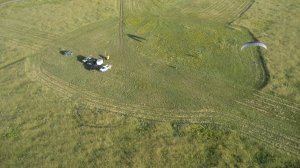 Perfectly calm morning! Jerry, Kevin and I delayed taking off for 30 minutes, while we watched Robert (John’s new student) attempt his first flight. No Joy but one hell of an attempt. after two aborted inflations, he got it up ok and was running with the wing stable overhead. Jerry commented that he was a little hesitant on the throttle and I could hear it running up and down. So…Robert got up some speed and was looking good when he jumped into his harness and started to come back down. Amazingly he went to his knees and managed to get back up and keep going without loosing control of the wing. After running right up to the edge of the cut grass he launched and climbed to 10 feet and let off the gas…., eventually coming down too fast to stay on his feet but not so bad that he was injured. Maybe a few bruises but thats it. He’s almost there. Probably next time.
I launched and flew for 40 minutes mostly down low.

Jerry came alongside and we explored the north and east side of the area. It was a huge pleasure to fly low and I felt very comfortable. Cruise RPM was about 3200 to 3400 where the vibrations and noise are considerably reduced. Just a great little flight!

#317 was shorter and it was starting to get thermal, I landed before It was even close to being an issue. The wind was picking up above 150 feet where I was only able to penetrate at 8 mph. Coming down to 75 feet I was moving along at 17. Both landings I came in under power to very soft touch downs. Then, Jerry went up in Johns U-turn and seemed to like it… “mostly benign but when you “got on it” the wing became sporty”.
Later we went to Carl Jr’s for a bite and debrief.
Jerry over our freshly cut LZ