Skip to content
First Sunset Fight of the Season

Finally an afternoon without thunderstorms building over the foothills! I packed and was at the field at 7:30. There as hardly a cloud in the sky and the breeze was half a knot from the south east. I set-up on the high side of the field where the weeds were a bit shorter. There was no problem getting the buggy rolling because of the slight grade and the wing came up perfectly. I think I’ve found the best was to lay out with a slight V and the center tucked up to the cell openings. Take off speed was 24 mph which leads me to think there was a gradient just above the surface.

The light wasn’t great for photography but I tried a 360 degree series anyway. 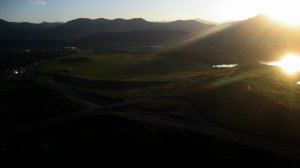 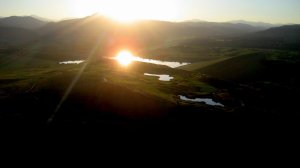 The air was good with a little mixing going on. I watched a kid practicing motocross for a while and as the breeze built I played with crabbing the wing across the field. When the sun set behind the foothills I turned on the forward strobe. It would be great if I could find a way to turn them both on while in flight. I boated around the field for 20 minutes and when the breeze started to shift to a Westerly decided to land.
For no good reason I was uncomfortable and flew as I expected something bad to happen at any minute. Huh where did that come from? Perhaps it was because I had to sort out a brake line which was not tangled but had wrapped and tightened on the wrong side of the risers. (NON EVENT)
I did have an issue where I had changed the position of the throttle and pinched my hand badly during landing. Part of it might have been because I wasn’t wearing the trusty golf gloves, the “D” ring on the Velcro was pinching the flesh between thumb and forefinger and when I flared it bruised the area behind my knuckles big time.. I’m going to have to sit in the garage and play with it since I’m still having trouble finding a comfortable grip.
PPG NEWS…
Jeff Baumgartner has sold his PPG Plans for Sky Bolt and website to Jeff Goin and his inventory to Terry Lutke. Jeff and Terry plan to keep this excellent design available for pilots who want to build their own. This level of cooperation speaks volumes about their unselfish love of the sport and I applaud them for it.
Bubba has invited everybody to his place next weekend for a midsummer fly-in. I’m bummed, this is the 3rd one that I’m going to miss. Next year for sure!