Drove up to Palm Bay and spent a day with Rex.  We flew the “compound” the first night.  It’s the location of the coming Palm Bay fly-in.  While there, I met Don Jordan who is probably the oldest American foot launch pilot. He trained Mike Bennett 5 years ago and he faltered me by mentioning the Gathering and this blog.  I think he is winding down but even though he’s not at the top of his game his piloting skills are pure grace.  Don, it was a pleasure! 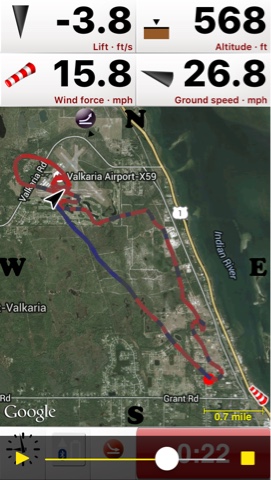 The next morning we hooked up with Eric Dufour at the Valkire Airport where I cracked off two flights.  The second one was cut short due to an approaching rainstorm.
Afterwards we stopped at Elizabeth’s shop. Their new home is beautiful and she looks very happy to finally have a real house down here.  The Eden III was being inspected and surprisingly its good for another year….but it did need to have several lines replaced.  Rex is going to take it back to Colorado and kite it for awhile.