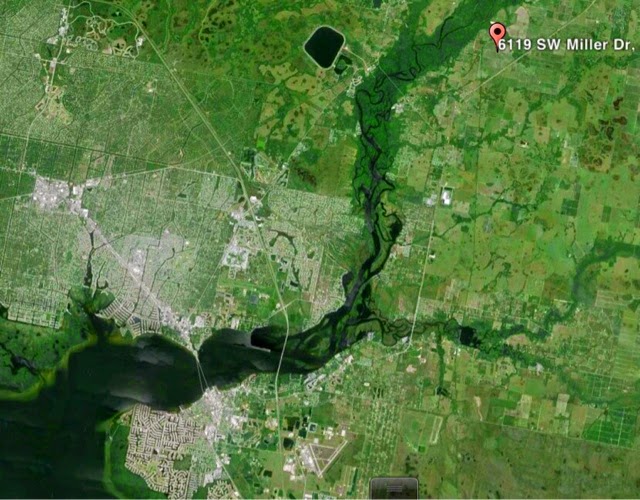 Mike is down here 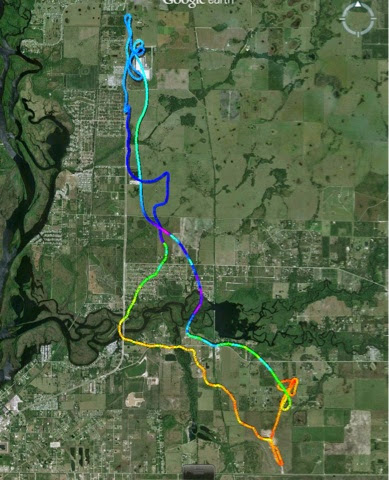 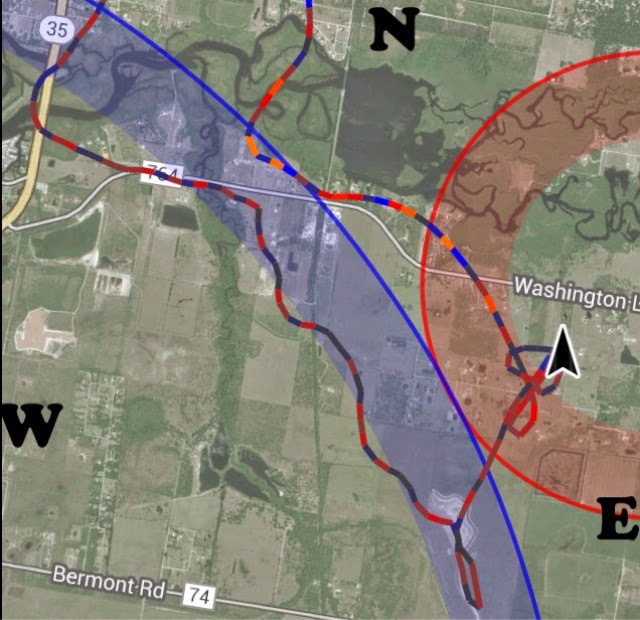 Slight incursion into Punta Gorda airspace.
Good flight for me.  Not so much for Mike.  Bob’s write up tells it better than I
05-09-2014
Yorkshire LZ
Flight 19
Flight time 01:52
PIC 16:32
45 miles covered
Allup wt 280lbs
Wx: clear 10/vis, 80°F
LVL 0-3 BUMPS
Mike Lange
Joe Onofrio (trike)
A planned flight turned into a locate, assist and extricate adventure.
I was testing my phone cradle strapped to my thigh, headset with radio cabling running under shirt and Mic switch running inside left sleeve. The setup and takeoff was normal but the phone fell out during the run. I noticed it as I was configuring for cruise. During my quick approach and landing I forgot to grab brakes.
Should hv landed before Mike who had setup in the exact location but I was hot and was landing with tip steering only, geez. To fast for me to run so second base slide was in order, just clearing Mike’s wing with motor power. After explaining to Mike about the phone, he called it and it was right between us in working order. Reset the wing and off I go again. Only gloves were forgotten.
The plan was to meet Joe Onofrio at Wal-Mart distribution center than fly north checking out a POI and possible LZ’S, none checked out. Arriving at the rendezvous waypoint, Joe was bugging out to the south as we arrived. He had an appointment with contractors. I’m the only one with communication.
My waypoints were two to three miles apart. Mike generally flies in my blind spot, so I navigated along my preprogrammed waypoints. After crossing a large plowed field with Mike in tow his silencer departed and broke the prop forcing him to attempt a 180 back to the plowed field, but altitude was not on his side and an orange grove landing was inevitable. He sent me a text at 8:07 though I wasn’t paying attention to anything on my phone except navigation until arriving back at the LZ and noticed Mike hadn’t landed at 08:37. Checking msg’s Mike sent me ” Muffler fell off. Broke prop stuck in trees ” Mike was unable to send me his location, so I flew between waypoints close to where he thought he had landed. He said he was stuck in a tree so I focused on large trees around dirt fields between waypoints and not orange groves, though eventually I saw him waving his arms alongside an orange grove. Thinking I needed to check fuel and land in an area for takeoff, I chose the plowed field next to the Orange grove though after landing it was apparent it wud be a difficult launch, I chose to call it a day knowing our location was within a hundred yards of vehicle rescue.
Their was only a ditch crossing with water, mud and man eating fire ants to the groove.
I text Joe our pickup location. Mike and I climbed an orange tree to untangle the Paraglider without damage. Probably took an hour plus with success. Joe arrived, help with the wing extraction and took some pictures. We loaded all equipment in the pickup and departed back to the LZ.
1) Radios are a hassle but worth the effort.
2) Learn how to send your location with your phone if able.
3) Water and a cold ass Corona at the LZ

They took risers off but what a tangled mess

We bagged us a wing from this here tree!