Wed
3:00pm Ollie and I leave for the event.  I forgot to pick-up the flight jacket.  We stop at Steve Katers and spent an hour catching up. Steve has been a great friend through thick and thin, we left with fresh vegetables, bike parts and a big smile.
Stopped in Grand Junction had “brenner” at the IHOP and bought a cheap jacket at Wall Mart.  Spent the night at the Travel Lodge.

Thursday
Drove to Moab and toured Arches.  Pulled into Gouldings about 3:00pm.  Olivia held her own playing Texas Hold Em with Sky King, Sean and some other serious players.

At the beginning there was a small problem when one pilot flew too close to the resort at the Navajo Tribal Park.  We had not had a formal briefing and unfortunately he wasn’t aware of the sensitivities of the Navajo about flying around their facilities and habitations.  A good time was had by all when he ascended from the valley floor below up to the Scenic Overlook, the resort guests waved happily and took photographs.  However what appeared to be a good opportunity to showcase our sport turned out to be exactly the opposite.   The Navajo Police promptly visited our landing strip and forbid us from entering the Navajo Tribal Park for the duration of the event.   Since there were still thousands of acres of beautiful country and more monuments than we could fly in a month, we chose not to argue the legalities of who controls the airspace and politely agreed to stay out of the park.   The Gathering continued and everyone was able to get as much airtime as they wanted.  Future pilots should be able to fly the whole area unencumbered provided that they keep 1500 above the desert floor.  It would be  prudent  to fly at least that high anyway to have enough glide to find a safe landing and pick-up if needed.   The moral of the story was … If you find yourself at a Fly-In a day or two early, be sure to READ THE RULES and know the particulars of the area before launching.

Sat.  Blew the first attempt and noticed the axle rods were cracked.  Spent the morning replacing the rods.
Ollie and I went for a a very short bike ride,  I wanted to take her west behind Goldings Butte but we had to turn back when my Myata Cyclocross bike couldn’t handle the soft sands on one inch knobbys.

We did see a good sized  tarantula that we watched walk across the road..  After a good downhill to the LZ we watched the Navajo High School Homecoming Parade.  It was sweet … Beautiful children riding all kinds of contraptions throwing candy to the crowd. 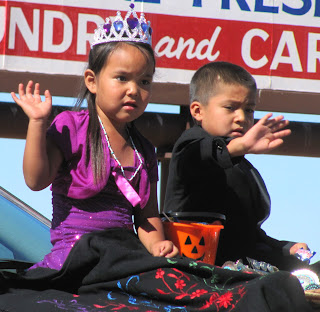 At 4:30 we met at the LZ and Olivia went for her first flight with Randy on his beautiful orange PPC.  I wanted to fly with them but by the time I set up they were coming in to land.  My flight was a  short one, the winds were starting to get twitchy and I didn’t see any need to fight it since Olivia was already down. (#441)

That evening we were treated to some spectacular flying by Dell and some others.  One of the Paradrenalin guys flew well past dark.  Very spooky, there was no moon and the only way to discern the rocks was … there is black and blacker.  I watched him ridge soar on the southern butte and wondered what it must have been like.  The lights rigged to his motor were impressive and I was thinking that he might have had a way to slant them down to use for landing lights but didn’t hang around to see how he managed to land.  Later that year I saw the amazing Nirvana Show at the Salton Sea.  LEDs imbedded into the carbon prop with a graphics program running … very cool.

The banquet at Gouldings was well attended.  The new assistant manager created some problems and asked us to remove the alchol that we had permission to bring in. Barb was off so i had to make peace with the local officer.  Paul Anthem got up and told us of their trials getting to the event and I said a few words.  The night was topped off when  Ryan asked Olivia to pick the raffel winner of a new Paradrenalin Paramotor.  It was good to see new and old friends sharing a meal.

Sunday Nice flight in the morning. (#442) The Trim cam jammed in the hang point loop but I was able to free it with a few hard smacks.  Dell, Russ and Sean put on a great show.  Olivia packed her stuff and I took a shower with a scorpion… poor guy couldn’t take the hot water.  On the road by noon.  Went home through Pagosa Springs and Salida.  Beautiful drive.  Home by 10pm