Skip to content
0445 hours Last night after dinner I went below and Bill took the 1st watch. The boat was racing along at 9 – 13 knots. Bill was tweaking every little thing to get speed. It’s great to have a computer manning the helm! The sea had come down to 3-4 feet and every couple of waves we would do some serious surfing. Lying in my berth was a rush… First the sound of the water would die down until it was strangely quiet, then my feet would start to go down and my head up and then suddenly it would sound like a freight train as we accelerated into the trough. After 30 minutes of enjoying it blind I went on deck and there was Bill looking like the Cheshire Cat with his grin glowing in the dark. I spent the first watch watching the new Bruce Willis movie Surrogates on the I-touch. The movie was so so but the novelty of helming a cat in the Spanish West Indies, under the full moon while watching a Sci-Fi from the palm of my hand… was priceless.
What a spectacular night, a few thin cirrus clouds making streamers up high and the perfect huge full moon. 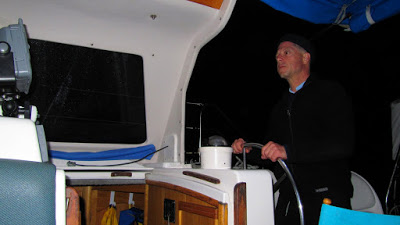 Off watch 1-4 I had no trouble going to sleep. Strange dreams of shopping for a cell phone on Catalina Island with a cast right out of Alice in Wonderland.
0500 hours Large Ocean Liner off to port all lit up like a Christmas tree.
0830 hours 33 nm north of the Dominican Republic, just above Puerto Plato. The wind died just as my shift was ending and we are motoring at 5.7 knots. Bill came on deck just in time to see a beautiful moon set, we had a cup of tea and I went below to take a shower. It felt great to wash the bug spray and oily sun screen off.
1000 hours Breakfast and some minor housekeeping, I lay down for a minute and slept for an hour and a half. Had a dream about Garrison Keelor and my father telling me jokes. Gawd I love the “adventure trip dreams”, it seems like I can’t remember a dream to save my life but on good trips they stay with me forever. I still remember some of them from the European Bike tour of 81.
1300 hours Lunch was wraps made from last nights’ dinner.
Bill was able to keep it down which is a good thing because he lost the last two dinners. I’m thinking it must have been a gut bug rather than sea sickness.
1400 hours I’m sitting at the helm watching the winds begin to build, unfortunately it’s right on the nose. Bill is below taking a nap but I’m sure he can feel the boat and knows exactly what is going on. We are motoring but I suspect that we couldn’t do any better under sail. ( 3.5 – 4 knots ) The clouds are forming a big U with us sailing right into the center. I’m going to wait 20 minutes and wake the skipper. White caps are starting to form.
1500 hours We are under sail, tracking 011 degrees. Opps… wind shift sailing by the wind we are at 043 degrees against us. 10 more degrees and we can come about to a favorable tack.
1530 hours Tack to starboard 5.1 knots VMG.
1715 hours 6 foot seas off starboard bow, winds are 18 -20 triple reef main, boat is riding much better. Dinty Moore stew with giant pretzels for dinner. Bill enjoyed it twice …going down and coming up… Last night was mellow and beautiful, tonight looks to be an endurance test. I got some good rack time today so I don’t expect to be nodding off like a couple of nights ago. Since the front has arrived sooner than expected the winds are all wrong and we will probably not try to make Iguana Island. It wouldn’t have been difficult in good weather but arriving at midnight in a storm was asking for trouble.
2200 hours We have been on a close reach to starboard for awhile and when the wind shifted Bill decided to tack to port sending us almost directly north at 4 – 5 kts. Steering by the wind we varied between 001 degrees and 024 degrees until midnight when we jibed back to starboard. It bought us a little distance from Hispanola but didn’t advance our course. Sometimes the fastest way to a mark isn’t what you think it is.