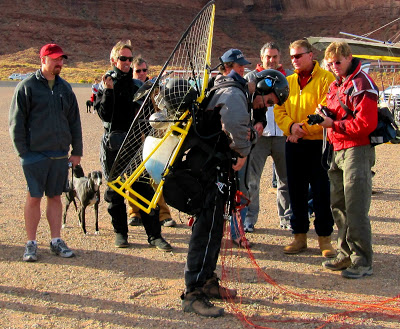 Conditions were wonderful, light breezes made for easy take-offs. I launched from halfway down the runway to avoid yesterday’s mistake…and I switched to the PowerPlay Sting. What a difference! The climb was much better; I locked the throttle at 80%, hooked up the foot steering and headed over to the park. The rig was climbing at 130 ft/min and with a strong tailwind …moving fast. I figured that if I had a hard time penetrating on the way home, I would go low and if that wasn’t enough, I could land out and hitch a ride back. 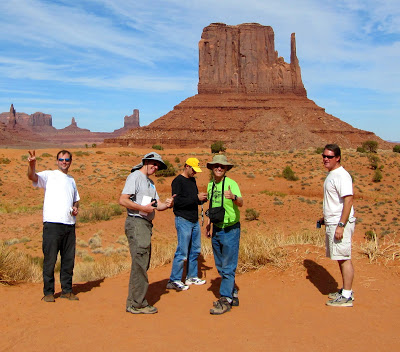 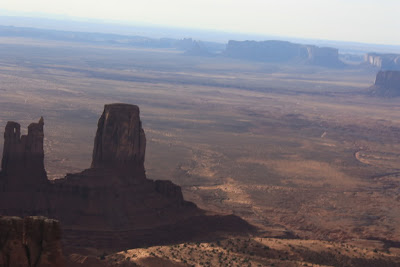 Photo by Faith Wesstrom
There were wings all over the place, some were heading into the valley and others were coming from the North after visiting the seven sisters and possibly rounding Brigham’s Tomb. After clearing Gouldings, I flew south along the highway and crossed over Wetherill Mesa into the Valley of the Gods, three miles south of the visitors center. It was spectacular. I was surrounded by a labyrinth of massive buttes and delicate spires towering a thousand feet above the desert floor. After doing a couple of big slow circles I turned North past the Camel and Elephant Buttes until I reached the West Mitten where I turned back towards Gouldings. At 2500AGL the best speed was 5 mph at 2000AGL it was up to 10mph and at 500ft I was clipping along at 18mph. 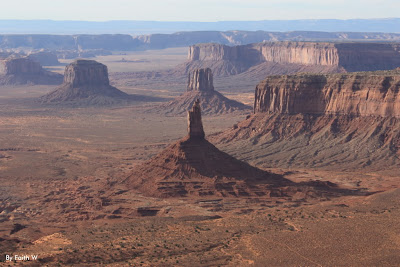 When I got back to the field there was a plane circling the LZ waiting for everybody to clear the runway. I positioned myself at 500 ft just north of the airstrip so that I would be well inside of the flight pattern and out of the way. There was a truck sitting right in the middle and I was hoping that he knew there was a plane waiting to land. It took entirely too long, with the foot steering engaged and the throttle set to cruise I circled for at least 15 minutes. Eventually the runway was cleared and I landed with a long low and slow run up the runway. This was the best flight so far. 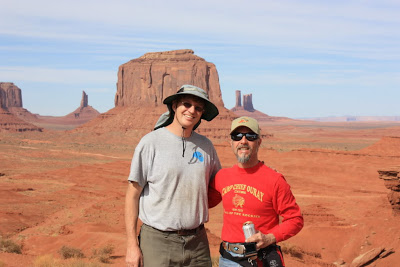 After Lunch a bunch of us piled into the pick-up and went for a tour of Navajo Tribal Park. We had a great time stopping at the various outlooks and pointing out places where we had been and planned to go and taking the obligatory,“We were there”, pictures. All of us agreed that the monuments looked allot bigger from the ground but scarier from the air. I was astounded when Jeff told me that he was anxious flying close to these massive and unchanging structures because I felt the same way. We both knew that they couldn’t “suck you in” but at the same time it took force of will to fly right up to the wall of something so huge and unsympathetic. 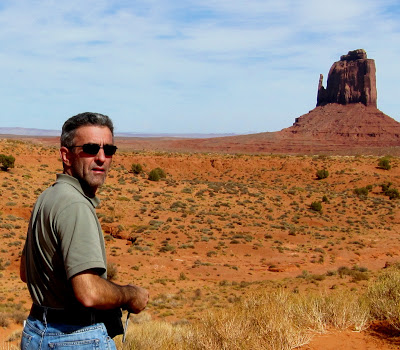 Seeing the monuments from the ground was a real eye opener. For one thing, I realized that if I were ever forced to make an emergency landing, I had better be able to glide to a road, because it would be almost impossible find smooth patch amidst all the skree. Not to mention the difficulty in pushing the Rig to a place where I could be picked up. 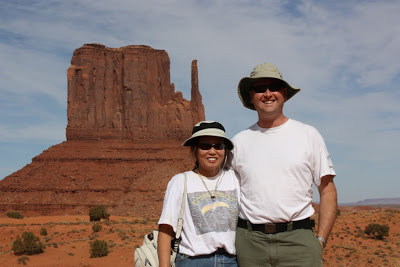 That evening we met at Gouldings for the Big Dinner. 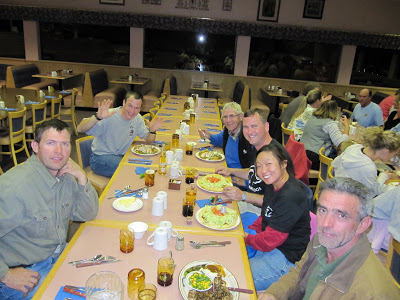 Into the truck and down the hill we went. Ola looked very comfortable sitting in the buggy and Faith was riding shotgun as the token lady but I worried that I was going to lose either Ivan or Uri off the back, fortunately I remembered the speed bumps and we made it without incident. 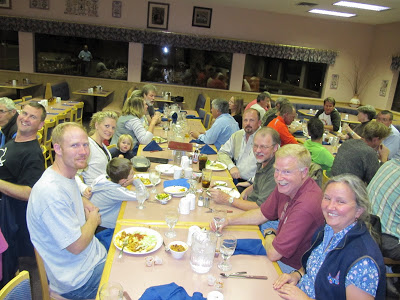 At dinner I had the ribs which I wish I’d tried sooner because it was by far the best dish on the menu. Sitting with Johnny Fetz, Chad and Greg Bishop, we talked about next year and things we wanted to do. I really hadn’t thought about “non-organizing” it again but listening to the gang …it sounds like allot of people are talking about coming back and doing it again. 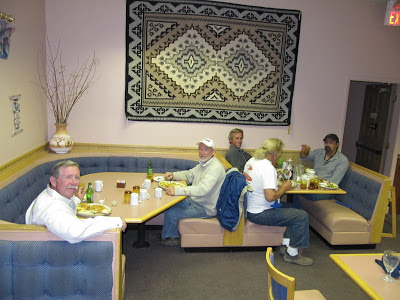 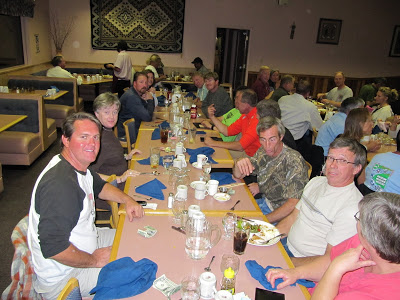 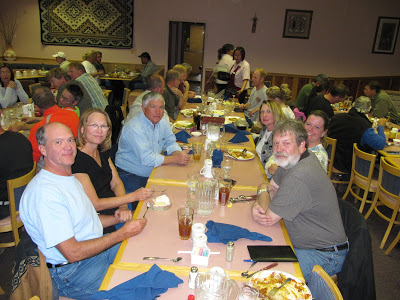 After the meal I got up and said a very few words, thanking everybody and inviting them to come back next year. Someday I’m going to surprise them and prepare a real speech but for now the minimalist thing was working for me. One thing for sure it was much more satisfying that the last time when I had a pilot down and no one knew his condition.
After dinner we hung for about an hour and told hanger stories. It was a hoot to see Jeff sitting with John Black and Mo. The atmosphere was celebratory, just about everyone got one “EPIC” flight and no one was injured.
Eventually it broke up into lots of little parties. I made the rounds and visited a couple of them; the campfire discussion was in full swing with Russ, Faith, Ola, Ivan, Johnny, Uri, Chad and a few others. Tonight’s topic was wing design, what’s new, what’s being developed… and… Government interference in the Ultraflight World, the good bad and ugly. Russ had an abundance of firewood so the fire was high and accommodated the large group nicely.

Down at the Bachelor’s Quarters there was a rowdy game of Texas hold-em. Csaba and John Black were going at it hard and heavy while the guys who had donated to the cause looked on with great big smiles. 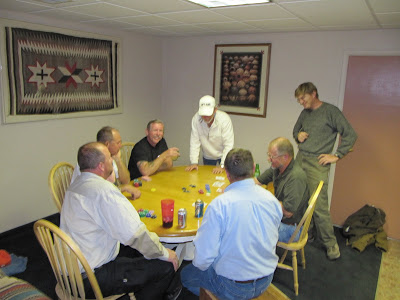 The happiest guy was Jim King who had seen god earlier in the day when he got pinned to the earth by a running paramotor. Story is, that Jerry had fixed him a couple of Margaritas before dinner and he was feeling no pain. At Bob’s RV the “Acro Film Festival” was winding down. 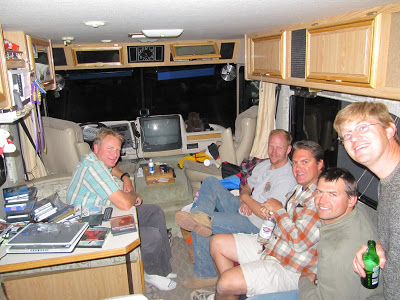 I was almost bowled over by Ivan when he staggered out of the RV… heading to bed…too tuckered for any more carousing.