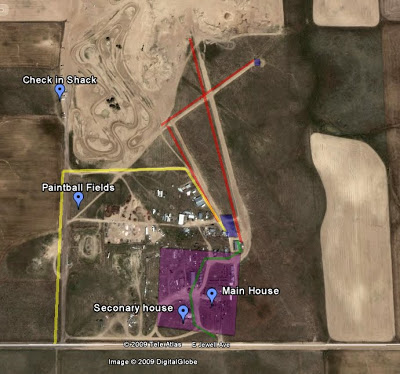 When I first arrive it was magic. Absolutely calm and the sun was just beginning to turn the eastern horizon pale orange. Mike and Craig arrived at 6:30 and we threaded our way around the buildings to the ultra lite area. There is a wide North South runway and a very narrow East West, that was made narrower by some recent grading.

No Worries…I kicked the worst of the clods out of the way and took off easily. It’s a little like flying down at the Springs. Very flat and not a lot of scenery. But i have to say… “that’s all right by me”, just getting up is good and the lack of elevation changes makes for smoother air. When I took off there was a light breeze from the West, after flying 50 minutes it had picked up considerably and the air was downright ratty. I don’t know what was causing the bumps…it was too early for thermals…we were way too far from the Rockies for them to cause a problem, but whatever it was, all three of us decided it was no fun anymore. That didn’t stop Mike from going up for a second flight :0 (No sweat…it didn’t seem dangerous…just bumpy.)

There is allot of air traffic in the area. At 3000+ are the big boys, I think they are coming out of centennial or possibly the air force base. Mike credits them for stirring up the air..I don’t know but they are right over us. There is also another ultra lite park around here. I saw a delta and a fixed wing ultra and on the way out there was a biplane tooling around. If I understand the rules, we have to stay below 700 feet to the West and South but can climb high to the East and possibly the North.

Snowflake has a couple of things that will bring me back, there is an old Titan Missile silo 5 miles east that I’m looking forward to exploring and it’s a pleasure to have a nice smooth runway.