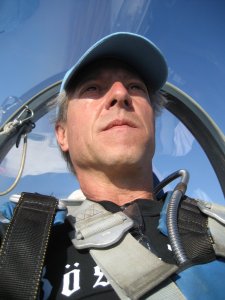 The wind was blowing hard all day. Which was great as long as it was blowing my trailer north. I was afraid that it would not be flyable but Bob showed up 30 minutes early and we were in the air by 2pm. He joked that people often got sick , I assured him that I knew there was a wave out there waiting to turn me green but I’d been lucky so far. I knew when he broke out the reserves Doc Holliday was serious. Since I wasn’t a paying customer he was entitled to do whatever he wanted . I challenged him to show me his stuff and he did. We rolled and stalled and a couple of other maneuvers where we dropped a wing and recovered by going inverted.

We got in 3 flights. 35 minutes…45 and 25. Each time we were towed to 3000 feet and on the second flight we climbed to 8500 feet. By the last flight the thermal activity had come down to where there was no lift…only stong wind from the south.

Someday I’ll get poetic and try to discribe it….For now …all I can say is awesome!