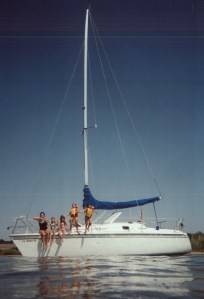 Sat. Night 11pm 8/23/03
It is a beautiful thing…
Ollie Stef & Rose have decided to sleep in the cockpit and, so, there is plenty of room for the rest of us who chose to sleep below. I’ve made my nest in the port settee with lots of cushions. The oil lamp is burning over my shoulder and there are cheese and grapes on the table. The anchor is set in mud and holding nicely against a steady 15 knot breeze from the SSE. The thunder storms from earlier have moved north and are giving us a nice light show. It just doesn’t get any better…!
This afternoon I was afraid we were going to be blown out. There were two large storm cells building to the south and West and the wind was cycling every 10 minutes. The girls however paid no attention and trooped below to put on their swimming suits. At first the sun was behind a thunderhead making it was too cool to jump in the lake. So… I dug out the water cannons and watched while they tormented each other with big blasts of poorly aimed water. Eventually the storm cloud moved on and a big warm sum made the lake look a lot more inviting. After a rotation of 15 jumps off the stern I broke out the fried chicken, BBQ potato chips and we had dinner prior to leaving the dock.
At 5:30 we cast off and we munched chocolate meringue cookies and strawberries while I steamed to a nice anchorage about 125 yards off the swim beach. The girls bickered most of the evening but seem to be enjoying themselves. I think that if I had not been there trying to keep order they would have had a perfectly wonderful time…but they put up with their ol man and giggles prevailed.
The plan for the night was for the balloons to be inflated and illuminated while the crowd wandered in and around the balloons. When it works, it’s beautiful, the park looks like a giant backyard with huge Christmas ornaments scattered about. Tonight was mostly a bust, the wind was still cycling and only one team tried to “light up the night”. They got it up and lit but you could tell they were having trouble even with double teams of ground handlers holding it down. They struggled with it for ten minutes before bringing it down. The girls didn’t seem to mind they saw their first balloon there was plenty to play with, the anchor light needed tending and Radio Disney was blasting from all speakers. They got a taste of it and we were all looking forward to the mass ascension tomorrow morning.
About 9:30 the troops were getting tired and after fighting over who was going to sleep in the forward birth, they all changed their minds and decided to sleep “on top”. It was a bit cool but I figured the foredeck would protect them from the wind. So… I gave my permission and hoped I wouldn’t have to dash on deck because we had hooked a fish on the tackle that had set out earlier.

Right now … in my nest… listening to old time radio and children whispering on deck. It’s time to check the anchor and go to bed. Tomorrow is going to be a big day.